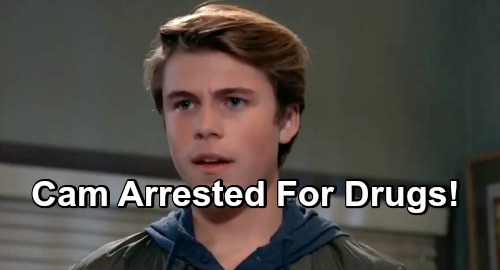 General Hospital (GH) spoilers tease that Liz (Rebecca Herbst) will find herself in family crisis mode. She’ll need Franco’s (Roger Howarth) support as she deals with double trouble next week. For starters, Liz will finally learn the full story behind Aiden’s (Jason David) bullying. She has no idea who’s been targeting her sweet son, but she’s about to find out!

GH fans can expect Liz to seethe over the bully’s identity. She’ll discover that it’s Charlotte (Scarlett Fernandez) and rage over her parents’ lack of action. Liz recently had a quick chat with Lulu (Emme Rylan), who admitted Charlotte was going through a rough phase. It’ll all click into place for Lulu when she realizes Charlotte’s the one who’s been tormenting Aiden at school.

Liz will undoubtedly feel like Lulu, Valentin (James Patrick Stuart) and Nina (Michelle Stafford) have spoiled Charlotte rotten. She’ll think they aren’t giving Charlotte the proper discipline or teaching her what real boundaries should look like.

To be fair, Lulu disagrees with Nina and Valentin’s softer strategy. She can see that Charlotte needs tougher love, but it’s two against one here. Lulu’s done her best to handle this, but it’s a tricky situation. Nevertheless, Aiden is a precious little fella and he doesn’t deserve to be in such distress. Liz will demand some changes immediately!

Unfortunately, that won’t be the only issue Liz faces this week. General Hospital spoilers say another one of Liz’s boys will be stuck in a jam. Cameron (William Lipton) is pining for Josslyn (Eden McCoy), so he’ll try to numb his pain with pot. After he purchases some from a friend of a friend, Cam will get busted with it. He’ll be arrested and hauled off to jail, so Liz is sure to be distraught and furious.

General Hospital spoilers say Franco will try to be Liz’s rock, but he’ll still be grieving for Kiki (Hayley Erin). That could make it tough for him to keep a clear head. Life has thrown a lot at this family lately and will continue to do so. Liz and Franco will just have to stick together as they deal with all the chaos to come.

It sounds like some great drama’s in the works. We’ll give you updates as other GH news comes in. Stay tuned to the ABC soap and don’t forget to check CDL often for the latest General Hospital spoilers, updates and news.