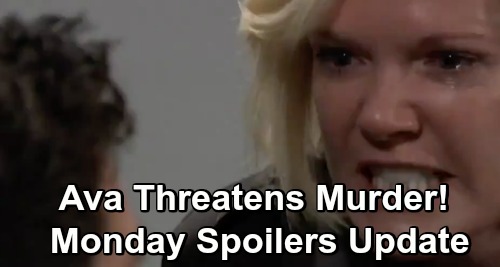 Chase (Josh Swickard) will tell Sasha that she’s needed at the station. He’ll push her to cooperate and help them catch her “sister’s” killer. Meanwhile, Julian (William deVry) will worry about his own sister’s plans. Ava has a tendency to take matters into her own hands in the worst way possible.

In “Kevin” mode, Ryan will ask Julian what he thinks Ava will do. He’ll wonder if Julian’s sure about Ava doing something extreme. Julian can’t be certain of that, but he’ll feel confident. Ava’s history speaks for itself when it comes to drastic moves and chaotic consequences.

In the interrogation room, Ava will pull a gun on Griffin (Matt Cohen). He’ll rise to his feet and beg her not to do this. Griffin will suggest that Ava’s only going to feel worse if she kills him and it’s later revealed that he’s innocent. Ava will brush off Griffin’s comments and rant about how scared Kiki must’ve been. She’ll insist that Griffin did the deed and now she intends to make him pay.

Fortunately, General Hospital won’t be adding another murder to the list on Monday. Ava will undoubtedly be interrupted or back off in the end. Over with Sonny (Maurice Benard), he’ll have to settle Carly (Laura Wright) down. She’ll be eager to use some new leverage, which probably means something juicy will surface against Margaux (Elizabeth Hendrickson).

Sonny has been seeing another side of Margaux lately, so he won’t be as convinced that this is how to handle their problem. Carly and Sonny will mull over the situation, which could lead to some conflict. Jason (Steve Burton) will also enjoy a tender moment with Sam (Kelly Monaco) in Monday’s new GH episode, December 3. He’ll address the complications between them and offer nothing but gentle reassurance.

Jason won’t want Sam to feel pressured to take the next step or make anything official. He’s just happy to spend time with Sam, so he’ll be happy with whatever kind of love she can give him. General Hospital spoilers say these two will keep crawling toward a real reunion. With any luck, they’ll get there sooner or later.

GH has some fantastic scenes in store, so don’t miss all Monday’s excitement. We’ll give you updates as other news comes in. Stay tuned to the ABC soap and don’t forget to check CDL often for the latest General Hospital spoilers, updates and news.