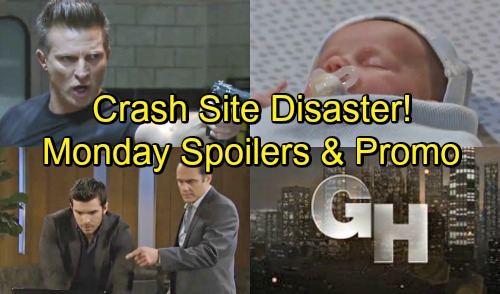 General Hospital (GH) spoilers for Monday, July 30, tease that Brad (Parry Shen) will admire his new son at home. He’ll watch Wiley sleep with a heart full of gratitude. Brad’s safe with the baby, which is great since an accident just went down. They managed to avoid the car crash across town, but that means someone else’s vehicle swerved into Michael’s (Chad Duell) lane.

Sonny (Maurice Benard) and Chase (Josh Swickard) saw the hidden camera footage cut out. They assume a collision happened, so they’ll want to get to the scene right away. Sonny will push Chase to figure out the last position of the car. Once they learn the location, they’ll rush over and hope they’re not too late to help.

Franco (Roger Howarth) will also be on the road soon. He’ll be heading home after helping Jason (Steve Burton), so he’ll tell himself he’s done his good deed for the day. However, Franco may have to do one more. It seems likely that he’ll spot the crash aftermath and try to pitch in.

Franco might have even more of a reason to help after he sees the victims. Based on upcoming hints and General Hospital spoilers, it looks like Cameron (Cade McWatt) and Oscar (Garren Stitt) may be in the other vehicle. There’s no confirmation on that yet, but it makes sense based on all the available info.

Liz (Rebecca Herbst) will grow concerned when she can’t get in touch with Franco, but he may be busy saving her son. The teens’ joyride may have ended in disaster. Michael and Nelle (Chloe Lanier) will definitely be in a desperate situation on Monday’s new GH episode, July 30. General Hospital spoilers say they’ll be taken to GH as soon as possible, but it seems Michael may be in the worst shape.

Nelle certainly didn’t want to put her own life in danger, but this ordeal could work to her advantage. If the crash damaged the recording, the evidence against her may be wiped out. Nelle confessed to killing Zack, so she’d like to see that problem go away!

Meanwhile, Jordan (Vinessa Antoine) will get updates on the accident. She may lash out at Chase for letting his plan go horribly wrong, but it’s not really his fault. Chase couldn’t have predicted that another car would veer into Michael’s path.

At Ferncliff, Jason will have other issues to deal with. He’ll receive the terrible news about Michael eventually, but he’ll need to assist Carly first. Jason will continue to wave that gun around. He’ll point it straight at Dr. Lasaris (Casey Biggs) and order him to turn the machine off. Carly’s not getting electroconvulsive therapy if Jason has anything to say about it!