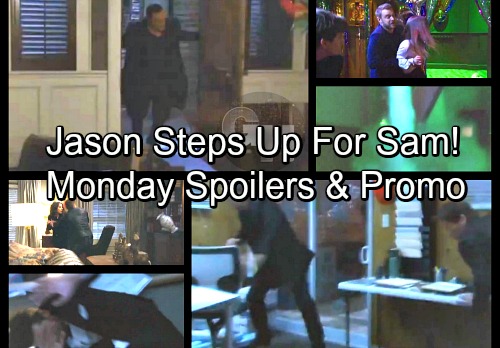 General Hospital (GH) spoilers for Monday, March 5, tease that many Port Charles residents will fear for their lives. An earthquake has left people in shock all over town. At the Quartermaine mansion, Jason (Steve Burton) will make sure Sam’s (Kelly Monaco) safe. After they check on the kids, Sam will ask Jason for a big favor.

Since Drew’s (Billy Miller) still at The Floating Rib, Sam will need Jason to take her there. He can weave around the rubble on his motorcycle, so he’ll be happy to pitch in. However, Jason and Sam will face some obstacles during this urgent mission. 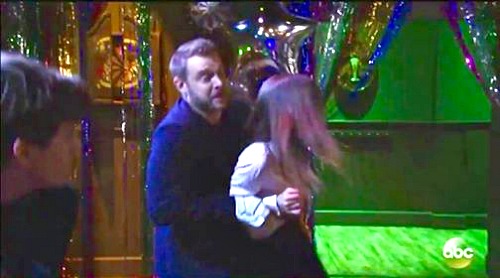 Speaking of urgent missions, Drew and Kim (Tamara Braun) will tackle one, too. They’ll want to find Oscar (Garren Stitt) and Josslyn (Eden McCoy) ASAP. Unfortunately, Joss and Oscar decided to sneak off to the freezer just before the tremors began. They’ll likely be trapped inside, so Kim and Drew will have their work cut out for them.

Meanwhile, we’ll get updates on GH’s wedding guests. There’ll be some major injuries for at least one attendee. Thankfully, Griffin (Matt Cohen) and Kiki (Haley Erin) will be around to help. General Hospital spoilers say Kiki will rush to Kevin’s (Jon Lindstrom) aid, so maybe he’ll be the person in the most trouble.

At the gallery, fate has dealt Nelle (Chloe Lanier) and Carly (Laura Wright) a double blow. Being stuck in an earthquake is bad enough, but being stuck with your worst enemy is downright brutal! Nevertheless, Carly may have a hint of sympathy for Nelle. The stress of all this could easily put the baby in jeopardy. 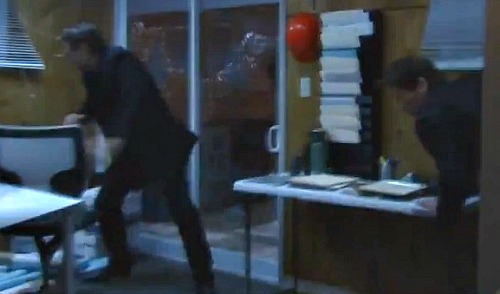 At home, Sonny (Maurice Benard) will return to an alarming sight. It seems Michael (Chad Duell) will be hurt in the chaos. General Hospital spoilers say Sonny will do his best to save Michael, but he’ll definitely struggle. Cell service will be terrible and it’s not like paramedics can brave the roads right now anyway. Sonny will naturally be concerned about missing Mike (Max Gail) and Carly as well.

Over with Curtis (Donnell Turner) and Jordan (Vinessa Antoine), they’ll wonder if Jim Harvey’s (Greg Evigan) secret plans had something to do with this earthquake. While they worry about their loved ones, Jim will suggest it’s every man for himself. He’ll leave Franco (Roger Howarth) behind as the shaking subsides.

Ned (Wally Kurth) will soon step up to calm the people of Port Charles, but this city will certainly be in crisis mode. It sounds like Ned will have to be a true leader when PC needs him most. We’ll keep you posted as other GH news comes in. Stay tuned to the ABC soap and don’t forget to check CDL often for the latest General Hospital spoilers, updates and news.