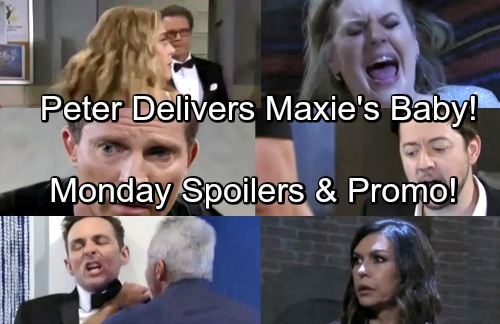 General Hospital (GH) spoilers for Monday, May 21, tease that Robert (Tristan Rogers) will hurl Valentin (James Patrick Stuart) up against the wall and demand justice. He must’ve faked that collapse to surprise a guard and score his freedom. Now Robert’s on a mission to make Valentin pay!

Robert already got in one good punch and there could be more to come. Valentin will really be feeling the heat by the end of this showdown. You can bet that Robert will spread the word about his captor. It sounds like Valentin’s destruction is kicking off, so don’t miss the stunning moments ahead.

Meanwhile, Peter (Wes Ramsey) will help Maxie (Kristen Storms) in his car. He was taking her home when her water broke, but they won’t be able to make it to GH. It seems Peter will just have to deliver this baby right then and there.

General Hospital spoilers say Maxie will cry out as she battles intense pain. She’ll worry that something’s seriously wrong, but Peter will convince her to focus on the task at hand. Back at the Nurses Ball, Dr. Bensch (James DePaiva) will corner Kiki (Haley Erin) backstage. She’ll be in her slip and handling a wardrobe malfunction when he moves in.

Kiki will panic when Dr. Bensch tries to shut the door behind him. General Hospital spoilers state that Griffin (Matt Cohen) will interrupt, so Dr. Bensch will bail. Nevertheless, Griffin will definitely sense that Kiki’s upset. He may miss Ava’s (Maura West) big number while he’s comforting Kiki. A huge “GrAva” blowup is brewing later this week.

On Monday, Sonny (Maurice Benard) will also have Ava on his mind briefly. He’s still miffed about the custody situation as well as Ava’s decision to back up Nelle. However, Sonny will insist that the night’s too important to let Ava ruin it. He’ll try to help Mike (Max Gail) keep the fun going.

Elsewhere, Spinelli (Bradford Anderson) will hack Peter’s (Wes Ramsey) emails and see some from Heinrik’s mother. Since Anna (Finola Hughes) pitched her plan to Jason, he’ll know she’s in serious trouble. There’s a good chance Jason will rush off to stop the danger.

On the pier, Anna will wonder why Heinrik’s late. Peter will still be busy with Maxie’s baby drama, but their faceoff has to happen sooner or later. When it does, you can bet it’ll bring explosive tension on Peter’s end.

General Hospital fans won’t want to miss all the chaos ahead. We’ll give you updates as other GH news comes in. Stay tuned to the ABC soap and don’t forget to check CDL often for the latest General Hospital spoilers, updates and news.