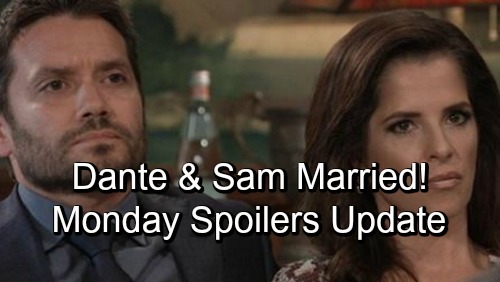 General Hospital (GH) spoilers update for Monday, November 12, tease that Sonny (Maurice Benard) will dream up a whole different life for himself. After a few moments of reflection at Jeanette’s (Ely Pouget) house, Sonny will drift off to sleep. Margaux (Elizabeth Hendrickson) will remain conked out on the couch, so Sonny will have plenty of time to consider the past and an alternate future.

GH is honoring Benard’s 25th anniversary on the ABC soap. They’re giving us a Sonny-centric episode, which will bring huge changes for Sonny and the Corinthos clan. General Hospital spoilers say Sonny will imagine making a different choice all those years ago. Benard’s real-life son, Joshua Benard, will step up for that pivotal point.

Instead of signing up for a life of danger and destruction, young Sonny will pick a better path. He won’t resort to violence, so he’ll set himself up for a safer marriage and family situation. It turns out that decision will turn Sonny’s world upside down! Things will be completely different in this alternate universe – starting with who Sonny’s married to.

It looks like Sonny’s wife will be Olivia (Lisa LoCicero) instead of Carly (Laura Wright). General Hospital spoilers say Carly will still be part of Sonny’s fantasy episode, but she might find herself with someone else. Perhaps Jason (Steve Burton) will be her main squeeze. He certainly won’t be with Sam (Kelly Monaco). In this startling dream, Sam will be married to Dante (Dominic Zamprogna).

That’s right! Dante will be back for this one-time Sonny extravaganza. It turns out changes for Sonny will mean changes for Dante. He’ll be on the wrong side of the law! General Hospital spoilers say Dante will bring Sam to Pozzulo’s, which will be owned by Julian (William deVry) and Ava (Maura West). Sonny and Olivia will join the happy couple for dinner while they’re in town.

Dante will discuss the lucrative opportunities he’s involved in. He’ll be thrilled, but Sonny will clearly disapprove of his son’s mob-related path. They’ll really be flipping the script in this episode!

That’s when Julian and Ava will walk over to introduce themselves. They’ll reveal that Dante works for them, so that’ll be another interesting detail. As for Sonny himself, it seems his life will be pretty humdrum. There won’t be much to keep him busy without all the fires to put out.

General Hospital spoilers say Michael (Chad Duell) will also appear, so maybe his life took a wrong turn, too. It’d be fun to see Michael mixed up in some trouble. Anna’s (Finola Hughes) alternate road will be influenced by Sonny as well, so there’ll be several characters to cover in this special. GH will definitely bring some drama along with some fun.

Once Sonny awakens, he’ll learn some valuable lessons and put them to good use. Are you excited about these shocking scenes? We’ll give you updates as other news comes in. Stay tuned to ABC’s GH and don’t forget to check CDL often for the latest General Hospital spoilers, updates and news.