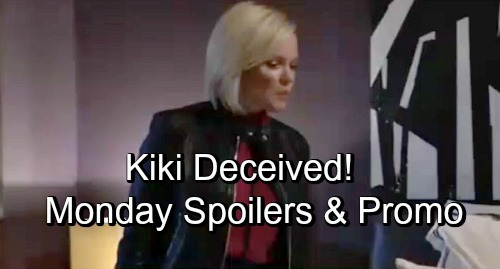 General Hospital (GH) spoilers for Monday, November 19, tease that Monica (Leslie Charleson) will try a new tactic with Oscar (Garren Stitt). He’s seeking emancipation because he wants control over his own life, even if it doesn’t last much longer. Oscar’s tired of being treated like a kid when he’s dealing with such a serious situation.

As a result, Monica will go for some honesty. She’ll ask if Oscar would like to know what he’s up against. Oscar will probably admit that he would, so Monica should explain the difficulties he’ll face and how soon he can expect them. She may offer her view on the clinical trial so Oscar can make an informed decision.

Meanwhile, Stella (Vernee Watson) will be thrown for a loop. It looks like she’ll spot the famous Marcus at Kelly’s. He was Stella’s great love, so Curtis (Donnell Turner) tried tracking him down. Unfortunately, Curtis found out Marcus was married and dropped the idea. Of course, there’s always a chance Marcus is on the verge of a divorce. Stella needs a little love in her life to help her mellow!

Over with Julian (William deVry), his actions will leave Sam (Kelly Monaco) impressed. These two have clearly had their fair share of issues, but they’ll share a nice moment in Monday’s GH episode. Julian will take as many of those as he can get!

Elsewhere, Kim (Tamara Braun) and Drew (Billy Miller) will be at odds. She’ll feel like he’s giving up, but that’s just not an option for her. Kim will refuse to accept Oscar’s fate or even this whole emancipation plan. She’ll be desperate to fight for her son, so she’ll be willing to do whatever it takes.

Other General Hospital spoilers say Ava (Maura West) will put the rest of her plot in motion. After Ryan (Jon Lindstrom) gave her a sleep aid, she crushed the pills into Sasha’s (Sofia Mattsson) soup. Now the vengeful fun begins! Ava will eventually drug Griffin (Matt Cohen) as well and somehow manage to get him in bed with Sasha. She’ll have the setup for a VERY compromising position!

The final piece of the plan will come through Franco (Roger Howarth). Ava will convince him that Griffin’s cheating, so Franco will be the bearer of fake bad news. Kiki will still have her doubts, but the accusation will mean more coming from him. She never would’ve believed Ava’s bogus story, but Franco’s? Kiki will at least have to consider it, especially since she’s already getting weird vibes.