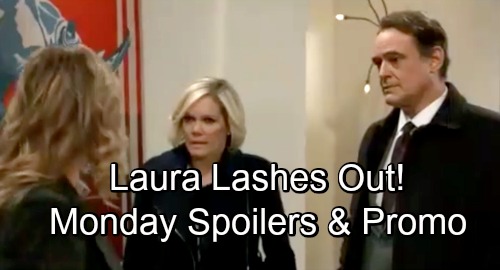 General Hospital (GH) spoilers for Monday, November 26, tease Laura (Genie Francis) will hit the roof over that kiss she just witnessed. Ryan (Jon Lindstrom) had a plan to cause chaos in Port Charles, but he probably didn’t count on Ava (Maura West) making his evil heart flutter. He just called her a goddess and locked lips with her at the gallery.

Laura showed up at the worst possible time, so she’ll rip into “Kevin” on Monday. Naturally, Laura won’t be too happy with Ava either. She’ll most likely assume they’ve been carrying on a full-fledged affair behind her back. That’s not the case, but Ryan won’t particularly care what Laura thinks. He’s only got eyes for manipulative Ava.

Meanwhile, Julian (William deVry) will show up at the Quartermaine mansion. He’ll have a package to drop off, but Ned (Wally Kurth) won’t approve of his presence. GH fans can expect some conflict, but let’s hope Monica (Leslie Charleson) can stay in control of her celebration. She’ll also order up some gourmet pizzas for a fancy Thanksgiving with a Quartermaine twist.

Other General Hospital spoilers say Sonny (Maurice Benard) and Carly (Laura Wright) will host a holiday party. Mike (Max Gail), Bobbie (Jacklyn Zeman), Stella (Vernee Watson), Michael (Chad Duell), Lucas (Ryan Carnes) and Brad (Parry Shen) will all show up. “Brucas” will bring “Wiley” to this gathering, which will give Michael another chance to connect with him. You can bet Brad will get nervous as usual!

Over with Drew (Billy Miller), he’ll once again try to talk Kim (Tamara Braun) off the ledge. If Oscar (Garren Stitt) wins his emancipation lawsuit, Kim’s fully prepared to kidnap him. She has big plans for Oscar to get treatment in Brazil. Drew will insist that it’s crazy, but Kim will snap that she’s trying to save their son. She’ll be willing to do whatever she has to do, even if it sounds completely insane.

At Charlie’s Pub, Josslyn (Eden McCoy) will call Oscar out on his lies. He’ll pretend Cameron (William Lipton) had it all wrong, but Joss won’t buy it. She’ll demand the truth about Oscar’s dire condition, so it looks like he’ll be stuck. Oscar will most likely spill all, so some emotional GH moments are on the way.

On a happier note, Curtis (Donnell Turner) and Jordan (Briana Nicole Henry) are about to tie the knot. Anna (Finola Hughes) will propose a toast just before the nuptials kick off. Nina (Michelle Stafford) will also have something to say to Curtis. As his best person, Nina may want Curtis to know how thrilled she is for him.

Of course, some Valentin (James Patrick Stuart) and Sasha (Sofia Mattsson) issues could be mentioned as well. General Hospital never lets the drama die down, so Nina may ask Curtis a few questions. She has to take steps toward the truth eventually!

Regardless, some fantastic scenes are coming up as GH continues to celebrate Thanksgiving. We’ll give you updates as other news emerges. Stay tuned to the ABC soap and don’t forget to check CDL often for the latest General Hospital spoilers, updates and news.