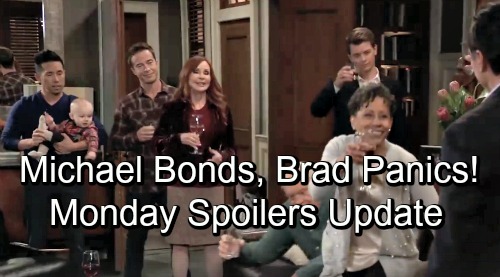 General Hospital (GH) spoilers for Monday, November 26, tease that Curtis (Donnell Turner) and Jordan’s (Briana Nicole Henry) nuptials will begin. Before they head to the altar, the bride and groom will spend some time with the wedding party. While Anna (Finola Hughes) toasts to Jordan, Nina (Michelle Stafford) will corner Curtis. She’ll suggest that they need to discuss a few things right away.

Nina will seem awfully serious, so this may be something personal instead of something regarding her “best person” duties. Then again, Nina could just be getting choked up. She can be a little emotional sometimes, so we’ll see if she needs a hanky by the end of their chat. As for Curtis, he’ll soon join Jordan to say some heartfelt vows on this special day.

Other General Hospital spoilers state that Julian (William deVry) will rub Ned (Wally Kurth) the wrong way. He’ll pop over to the Quartermaine residence and cause some conflict. Of course, Monica (Leslie Charleson) won’t put up with that for long. She’ll be anxious to relax with her loved ones and a gourmet pizza dinner. Monica will put out quite a spread this year, so it should be a hit with the fam.

Over with Josslyn (Eden McCoy), she’ll push Oscar (Garren Stitt) to stop lying about his illness. Joss will explain what Cameron (William Lipton) told her and ask why they both kept her in the dark. She’ll be hurt that Oscar was willing to shut her out like this. Oscar and Josslyn have an intense confrontation coming up, so GH fans can expect tears and a shouting match.

Elsewhere, Kim (Tamara Braun) and Drew (Billy Miller) will quarrel as well. She’ll refuse to back down on her desperate abduction plan. Kim will insist on doing everything in her power to save her son. If that means she has to kidnap Oscar and take him out of the country for forced treatment, then so be it.

Naturally, Brad and Lucas will bring “Wiley” along with them. Michael will be eager to cuddle with the kid, so he should feel more drawn to him than ever. He doesn’t realize that’s actually Jonah, but he can tell they have an unusually strong bond. Brad can also see that, so his anxiety will be on the rise!

At the gallery, Laura (Genie Francis) will march over to Ava (Maura West) and “Kevin” aka Ryan (Jon Lindstrom). She’ll let them have it for their lip lock and wonder how long this has been going on. It’s the first kiss Ryan has planted on Ava, but that probably won’t matter much to Laura – if she even believes him.

However, Ryan would love for Laura to get fed up and leave him alone. He’s been working to make that happen for a while now! General Hospital spoilers say Laura will indeed be hurt, but will she ease up on her questions and suspicions? It’s doubtful since “Kevin’s” behavior is becoming so bizarre.

It looks like another excellent episode’s on the way. We’ll give you updates as other GH news comes in. Stick with the ABC soap and don’t forget to check CDL often for the latest General Hospital spoilers, update, and news.