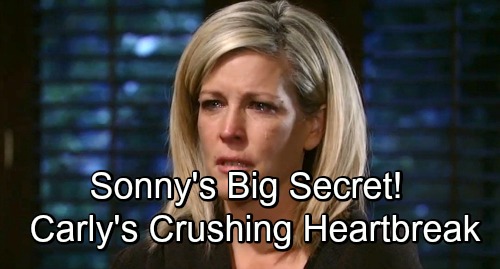 General Hospital (GH) spoilers tease that Carly (Laura Wright) will remain obsessed with the mystery patient from Ferncliff. She just can’t shake the feeling that she should help the man she left behind. Of course, GH fans know it’s not actually the same man anymore. Ryan (Jon Lindstrom) was originally the one who was tapping Morse code through the wall.

Now it’s Kevin (Jon Lindstrom) who’s stuck, so Carly’s got the right idea. She just might be Kevin’s only hope! Plenty of people can tell something’s off about the fake Dr. Collins, but no one in Port Charles really has any answers. Ryan’s great at coming up with plausible excuses. He still faces doubts from people like Laura (Genie Francis), but he certainly hasn’t raised any twin suspicions yet.

However, that could change thanks to Carly’s latest discovery. With a little help from Spinelli (Bradford Anderson), Carly was able to get a crucial name. General Hospital viewers watched Carly write down “Wilson” during their phone call. Meanwhile, Ryan upped “Mr. Wilson’s” dosage at his new facility and Lulu (Emme Rylan) reminded Maxie (Kirsten Storms) that Ryan once went by Todd Wilson.

That name has obviously been tossed around a lot, so it could play a role in how Ryan is exposed. General Hospital spoilers say Carly will do some more digging. She’ll hope this name won’t turn into another dead end. Carly desperately wants to help “Wilson” get out of his terrible situation. She can’t stand the thought of even one patient being held against his will.

Carly won’t realize it, but she’ll actually be fighting for someone she knows and cares about. Kevin was a big help to Carly before the twin swap. He was her lifeline when things were bleak at Ferncliff, so now’s her chance to return the favor.

Alas, no good deed goes unpunished. GH seems to be pushing Margaux (Elizabeth Hendrickson) in Sonny’s (Maurice Benard) direction. While Carly’s busy playing detective and helping a man in need, Sonny could be moving toward a terrible betrayal. Will he cheat with Margaux while Carly’s distracted? That could lead to General Hospital’s next big secret!

On top of all that, Carly will be putting herself in grave danger. The closer she gets to Ryan’s secret, the more likely it is he’ll take deadly action. It sounds like another major Corinthos crisis is on the way. We’ll give you updates as other GH news comes in. Stay tuned to the ABC soap and don’t forget to check CDL often for the latest General Hospital spoilers, updates and news.