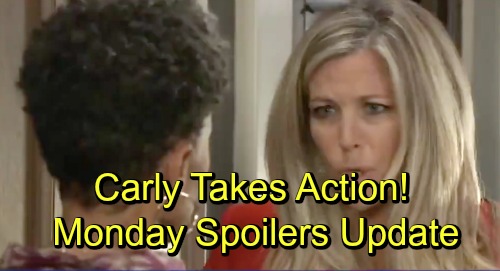 General Hospital (GH) spoilers update for Monday, October 22, tease that Laura (Genie Francis) will catch Ryan (Jon Lindstrom) off guard. After a board meeting at GH, Laura will corner “Kevin” and urge him to go get a drink with her. She’ll hope they can unwind together, but Ryan will make excuses as usual. He’ll even fib that he’s monitoring a sleep study, which will mean even more time away from home.

Laura will once again feel snubbed, so she’ll push for answers. She’ll argue that “Kevin’s” been avoiding her ever since she came home. Laura’s back in Port Charles, but she’ll think it feels like they’re still on different continents. Before Ryan can reply, Scott (Kin Shriner) will inadvertently come to his rescue. He’ll waltz over to embrace Laura and deliver some big news to “Kevin.”

Scott will admit he was interviewed for The Invader’s Ryan Chamberlain anniversary edition. Lulu’s (Emme Rylan) writing all about Ryan’s killing spree, so she needs the full picture. Since Scott represented Felicia (Kristina Wagner), he was asked to weigh in.

Scott will hope “Kevin” doesn’t mind. He’ll contend that it was good publicity for his practice, but a raging Ryan will scoff at that. He’ll point out that Scott lost the case and ultimately rush off. That’ll leave Scott and Laura to talk about how touchy “Kevin’s” been. They’ll chalk it up to bad memories, but the truth is far more sinister!

Meanwhile, Alexis (Nancy Lee Grahn) will hit Charlie’s Pub. She’ll show up to see Kristina (Lexi Ainsworth) and discuss her future. Of course, Kristina may be reluctant to go over this with her mom again. Alexis means well, but she always seems to come across as controlling in these conversations. Kristina wants to make her own decisions, even if she doesn’t know which ones to make yet.

However, Alexis might have a positive idea this time. She’ll do whatever she can to help her daughter, but a major blow’s brewing. Monday will bring a terrible crisis for Kristina, so she’ll need the support of her loved ones.

Other General Hospital spoilers say Josslyn (Eden McCoy) will be determined to fight. She’ll begin her pretend boyfriend plot with Cameron (William Lipton) and count on making Oscar (Garren Stitt) envious. There’s a good chance Oscar will indeed battle jealousy, but probably not enough to come clean about his tumor.

At home, Sonny (Maurice Benard) will seem a little blue. He’ll make some chit-chat with Mike (Max Gail), but there’ll be some sadness between them. Things are changing for the Corinthos clan and that has to be tough. As Mike’s condition declines and Margaux’s (Elizabeth Hendrickson) threat revs up, Sonny’s troubles will get even worse.

Over with Carly (Laura Wright), she’ll plan to tackle a dilemma. General Hospital spoilers say Stella (Vernee Watson) may burst her bubble a bit. Carly will think someone has to step up and she’ll argue that someone is her. This might be about comforting Michael (Chad Duell) or assisting Mike, so Stella will weigh in as usual. She’s never shy about voicing her opinion!