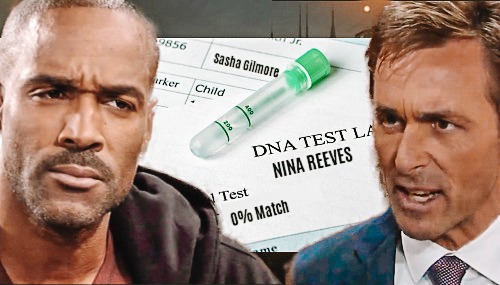 General Hospital (GH) spoilers tease that Curtis (Donnell Turner) will get some upsetting updates. He recently received some bad news from Olivia (Lisa LoCicero) regarding his wedding, but everything worked out in the end. Jordan (Briana Nicole Henry) and Curtis were forced to change the venue, but they’re still getting married as planned. Perhaps Curtis’ next blow won’t be related to his nuptials.

We can’t forget that Curtis has been a key player in the Sasha (Sofia Mattsson) storyline. Valentin (James Patrick Stuart) tasked Curtis with tracking down Nina’s long-lost daughter, so he stepped up and got the job done – or so he thinks. Two DNA tests confirmed Sasha as Nina’s child, but there’s got to be some sort of catch. It’d be strange for a show like GH to make things that straightforward.

Nina’s heart pendant has to come back into play somehow. She showed it to Sasha, who admitted she didn’t have the other half. It’s possible Sasha’s adoptive mom hid it from her, but what would be the point? Now that Sasha and Nina are bonding, there’s no need for jewelry to bring them together.

If Sasha were to present her pendant half later, it’s not like it would bring drama. It’d just be a “oh great, there it is” moment. General Hospital would get nothing out of that revelation. The real shocker would be in making someone else the pendant possessor! It could certainly create some questions and kick this story in high gear.

Curtis’ next round of terrible news could be the setup. What if he learns something regarding the DNA tests? If there were some mistakes after all, he’d have to tell Valentin. However, Valentin might urge Curtis to just leave it alone. Nina’s thrilled and Sasha’s warming up to the idea of getting to know her biological family. Since Sasha’s adoptive mother is dead, this is good for her, too.

Valentin wouldn’t want to crush Nina all over again. He certainly wouldn’t see the harm in letting them keep thinking their mom and daughter. Curtis might even agree with that. Nevertheless, secrets tend to come out on GH! General Hospital spoilers hint that the heart pendant could be what gives it all away.

Will Curtis discover a DNA blunder? Will Nina’s real daughter emerge with her heart pendant half eventually? We’ll keep you posted as other GH details come in. Stay tuned to the ABC soap and don’t forget to check CDL often for the latest General Hospital spoilers, updates and news.