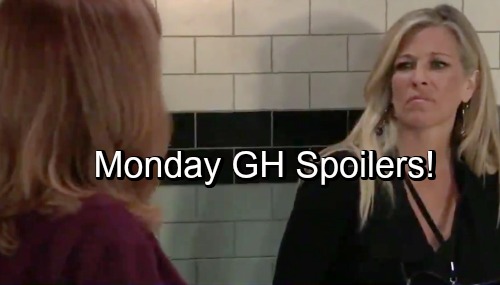 General Hospital (GH) spoilers for Monday, October 29, tease that Curtis (Donnell Turner) will have concerns about his upcoming wedding. He loves Jordan (Briana Nicole Henry) and can’t wait to begin this new chapter. However, Curtis won’t like the lingering family conflict. Stella (Vernee Watson) will refuse to budge on attending the nuptials, so Curtis will mull over how he can change that.

Meanwhile, Mary Pat (Patricia Bethune) will push Carly’s (Laura Wright) buttons again. General Hospital spoilers say they’ll have another faceoff, but Mary Pat should get what’s coming to her. She’ll end up backed into a corner later this week. Mary Pat will meet her match in Ryan (Jon Lindstrom), so it’s clear that grave danger’s brewing.

Until then, Margaux’s (Elizabeth Hendrickson) mission will continue. The DA has proven relentless in her pursuit of justice. Margaux’s determined to take Sonny (Maurice Benard) down, but he thwarted her attempt to speak with Kristina (Lexi Ainsworth). That’s why Margaux will try her luck with Michael (Chad Duell) in Monday’s new GH episode, October 29.

Fortunately, Michael will know better than to spill anything important. He’ll be busy dwelling on baby drama anyway. Later, Michael will meet up with Sonny to throw back a couple drinks. He may mention Margaux’s questions and talk about his continued struggles over Jonah’s “death.”

Sonny will do whatever he can to support Michael, but his own problems will be in the back of his mind. He’ll fear that Margaux’s vendetta could be what destroys him. Sonny won’t want to lose everything he’s built due to this chick. He’ll keep up his efforts to protect his family and avoid jail time.

Back at Ferncliff, Kevin (Jon Lindstrom) will see a tiny hint of hope. He’ll believe there might be a way to freedom, but his chance won’t pan out. Ryan will remain in control of the situation, so Kevin will just have to hang in here.

Finally, Anna (Finola Hughes) will explain a risky plan to Finn (Michael Easton). She’ll want to pay Britt (Kelly Thiebaud) a visit behind bars and make her an offer. Since Finn’s role in the scheme will go against his morals, he’ll naturally object. Nevertheless, this plot’s happening whether Finn likes it or not. He might as well get on board!

Monday will mark the beginning of Britt’s return stint, so General Hospital fans won’t want to miss it. We’ll give you updates as other GH news comes in. Stay tuned to the ABC soap and don’t forget to check CDL often for the latest General Hospital spoilers, updates and news.