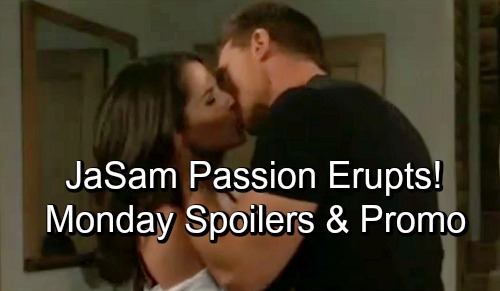 General Hospital (GH) spoilers for Monday, October 8, tease that Kiki (Hayley Erin) will have a vicious encounter with Ava (Maura West). It looks like Ava may inadvertently interrupt Kiki and Griffin’s (Matt Cohen) date, so this should be a disaster. Nevertheless, Kiki won’t let Ava stand on the way of her new romance. She’ll tell Ava to get out or she’ll drag her out of there herself!

Meanwhile, Nina (Michelle Stafford) will confide in Lulu (Emme Rylan). She’ll explain all the daughter drama and worry about what’s next. Nina will wonder what’ll happen if this girl wants nothing to do with her. She’d love to meet Sasha (Sofia Mattsson) and start bonding, but she’ll fear that’s wishful thinking.

Lulu may urge Nina to stay positive, but bad news is indeed brewing. Connecting with Sasha will be difficult, so Nina will just have to hang in there and hope for the best. Across town, Valentin (James Patrick Stuart) will face off with Laura (Genie Francis). He’ll ask how long she’s in Port Charles for, so Laura will admit she’s back for good. GH viewers can expect some major clashing for these enemies!

Over with Jordan (Briana Nicole Henry), she’ll deliver some unfortunate updates. Since there’s not enough evidence, the PCPD is dropping the Vincent Marino investigation. Margaux (Elizabeth Hendrickson) will be furious, but she won’t give up. She’ll resolve to work on this case herself, so stay tuned for some twists and turns.

Other General Hospital spoilers say Mike (Max Gail) will reassure Sonny (Maurice Benard). He’ll promise that the incriminating gun is at the bottom of the Hudson. It’s been there for decades according to Mike, so he won’t think Sonny has any reason to fret. Of course, Sonny should be a bit uneasy about the DA. Margaux won’t be backing down anytime soon, so a threat’s still out there.

Finally, Jason (Steve Burton) and Sam (Kelly Monaco) will get caught up in their kiss. They just locked lips, so it’ll quickly turn into an almost sex session. Alas, “JaSam” fans are going to be disappointed for now. Jason and Sam won’t be reuniting in the bedroom – not yet anyway! These two may inch toward that step, but they’ll need a little more time to mull over how to proceed.