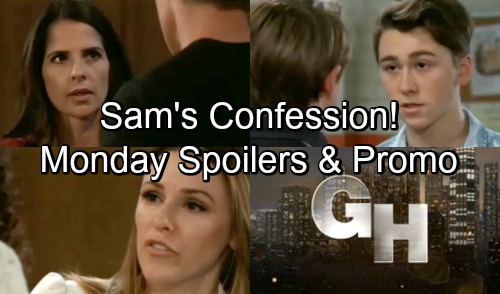 General Hospital (GH) spoilers for Monday, September 24, tease that Terry (Cassandra James) will have a tough chat with Drew (Billy Miller) and Kim (Tamara Braun). She’s doing everything she can to help Oscar (Garren Stitt), but she’s also trying to be realistic. Oscar’s odds of surviving this brain tumor are quite slim.

Terry will pass along any new info and suggest that his parents have to make some decisions. Kim and Drew might be able to get Oscar in some longshot experimental trial. However, that could eat up what little time he has left. They may have to decide if they want Oscar to spend his last months in a treatment center or out enjoying himself in the world.

Of course, Drew and Kim also have to gather up the courage to tell Oscar about his diagnosis. Too bad Cameron (William Lipton) already blabbed my mistake! After he explains why he thinks Oscar has cancer, the dying teen will ask for a favor. Oscar will insist that Cameron can’t tell Josslyn (Eden McCoy) about this. Cam won’t like the idea of deceiving her, but it seems he’ll keep his mouth shut for now.

Other General Hospital spoilers say Carly (Laura Wright) and Franco (Roger Howarth) will argue about Elizabeth (Rebecca Herbst). She’ll call Liz a hypocrite, but Franco will undoubtedly defend his fiancée. Still, things probably won’t get too heated on Franco’s end. He’s an easygoing guy and he knows this is just how Carly is! She lashes out constantly, so this is nothing to worry about.

Elsewhere, Sam (Kelly Monaco) will consider making a confession. Jason (Steve Burton) will look deep in her eyes and wonder what’s up. She told him she didn’t want to talk about it, but Jason won’t be sure that’s true. He’ll note that whatever she’s not telling him must be important. Whether Sam comes clean about what Drew’s dealing with or not, Jason will be there to support her.

At the police station, Margaux (Elizabeth Hendrickson) will have a major meltdown. Jordan (Briana Nicole Henry) will do her best to calm the DA down, but it’ll take some serious work. GH’s preview for Monday shows Margaux shouting, “I need to nail the son of a bitch that killed my father!” Jordan may promise that if the evidence is there, they’ll find it. She’ll want Margaux to trust that justice will prevail.

Across town, Sonny will confront Mike (Max Gail) about the past again. The situation’s getting dire, so he’ll want his dad to share everything he remembers. Jason will join this discussion eventually, so maybe they can form a plan to hide the truth or at least delay the inevitable!

General Hospitals spoilers say some shockers are brewing, so don’t miss all the action on Monday. We’ll give you updates as other GH news comes in. Stay tuned to the ABC soap and don’t forget to check CDL often for the latest General Hospital spoilers, updates and news.