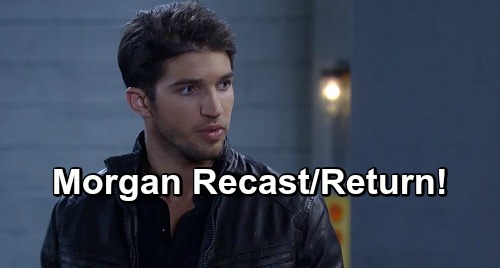 General Hospital (GH) spoilers tease that the ABC soap could be gearing up for a big comeback. Since Kiki (Hayley Erin) was just killed off, perhaps there’s room for a returning character. GH didn’t want to recast Kiki, but could they want to recast another role instead? It’s possible since we’re hearing so many Morgan (last played by Bryan Craig) mentions lately.

Throughout the murder aftermath, there’s been almost as much talk about Morgan as there was about Kiki. Part of that could be the Corinthos clan’s tendency to make everything about them. Carly (Laura Wright) can be especially self-absorbed at times, so it’s not surprising that she’d turn Kiki’s demise into a Morgan mourning fest.

Of course, Ava (Maura West) played right into Carly’s hand with her latest outburst. She argued that they were even since she paid for Morgan’s death with her own daughter’s blood. Carly fired back that it wasn’t true. Since Ava actually contributed to Morgan’s death, they’ll never be even…unless Morgan shows up alive!

All the Morgan drama has stirred up interest in the character and what the show might have planned. Bryan Craig doesn’t seem to want a lengthy return arc, so it’s probably best to just recast. Enough time has passed for people to accept someone else in the role. As long as General Hospital scores a hunk who can act, it’d be fine if a newbie puts his own spin on Morgan.

It’s clear that GH doesn’t want us to forget about Morgan. His family members are always sharing memories or visiting his grave to speak with him. General Hospital even did a whole storyline with Morgan at the center of it earlier this year. Nelle (Chloe Lanier) haunted Carly with eerie reminders of Morgan, so he’s never been far from our minds. Even as a dead guy, Morgan lives on.

That’s why GH should just go for it and get the ball rolling on Morgan’s comeback. It seems like there’s a lot of support for the idea out there. People tend to either want this return because they love Morgan or simply because they just want the Corinthos fam to quit blubbering about him!

Would you like to see Morgan come back from the dead? Are you OK with a new actor taking on the role? General Hospital spoilers say some shockers are looming in Port Charles, so maybe Morgan’s return will be one of them. We’ll give you updates as other GH news comes in. Stay tuned to the ABC soap and don’t forget to check CDL often for the latest General Hospital spoilers, updates and news.