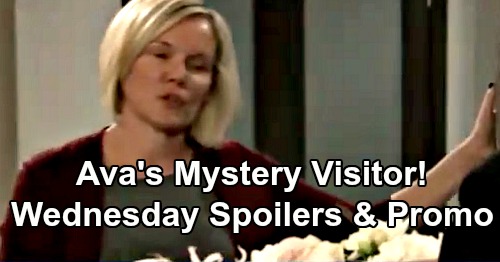 General Hospital (GH) spoilers for Wednesday, December 12, tease that Finn (Michael Easton) will refuse to leave Griffin (Matt Cohen) alone. He knows what it’s like to mourn someone he loved a great deal. Finn won’t want Griffin to suffer through a similar experience by himself, so he’ll offer plenty of support.

Griffin will wonder if this is payback and Finn will reply that it is. Since Griffin is always helping those around him, it’s his turn to get a dose of the same medicine. Meanwhile, Peter (Wes Ramsey) will sense that Maxie’s (Kirsten Storms) a little off. He’ll ask what’s wrong and hope it’s nothing he’s responsible for.

Maxie has been struggling with conflicted feelings lately, so that may have something to do with her mood. She’s caught between her past with Nathan (Ryan Paevey) and her potential future with Peter. Of course, Maxie could have some other problem on her mind as well. There’s always drama in Maxie’s world, so Peter will help if he can.

Other General Hospital spoilers say Sasha (Sofia Mattsson) will nudge Nina (Michelle Stafford) toward Valentin (James Patrick Stuart). She’ll encourage her “mom” to accept that she belongs with him and become a family again. Sasha just won’t see why Nina’s so determined to hold back her feelings.

Unfortunately, getting back together with Valentin will only bring heartache. He’s keeping a huge secret from Nina, which is suddenly in jeopardy thanks to Liesl Obrecht (Kathleen Gati). At the police station, Liesl and Valentin will face off. She’ll push him to spring her from the slammer or else he can say “auf Wiedersehen” to Nina!

Liesl heard that Nina’s daughter had been found, but she apparently knows the real story. She’ll vow to reveal Sasha as a fraud if Valentin doesn’t cooperate. At Ava’s (Maura West) penthouse, she’ll hear a knock on the door. Ava will fling it open and snap that she’s not up for visitors, but the person on the other side may change her mind.

There’s no word yet on who this GH mystery visitor will be, but he or she will come bearing flowers. It’d be nice if Dillon (Robert Palmer Watkins) could come along and express his condolences. Since Morgan’s (Bryan Craig) return was kept under wraps last time, Dillon is a possibility to consider. However, it’s equally possible that someone already on canvas will pop in for this surprise.

While Ava reacts to a shocker, Carly (Laura Wright) will confront “Kevin” aka Ryan (Jon Lindstrom). She’ll be appalled with “Kevin’s” decision to date Ava, especially when he’s not even divorced from Laura (Genie Francis) yet. Ryan won’t care about Carly’s disapproval, so he’ll undoubtedly brush off her complaints and move on.

Finally, Spencer (Nicholas Bechtel) will have a chat with Sonny (Maurice Benard). The guilty kid will admit he’s got heat on him. Spencer may drop a hint about the election tampering and hope that mobster Sonny understands. He made a tough and illegal choice, so he’s worried about the consequences.