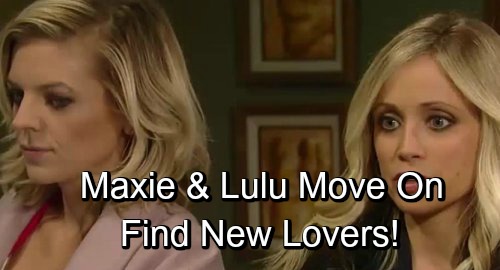 General Hospital (GH) spoilers tease that Lulu (Emme Rylan) and Maxie (Kirsten Storms) will do some reflecting. These two have both lost the men in their lives, but in far different ways. Maxie’s beloved hubby, Nathan (Ryan Paevey), is dead and gone for good – unless GH decides to resurrect him one day! We can never rule that out, but Nathan’s demise is permanent from Maxie’s perspective.

As for Lulu, her husband is off on a mission somewhere. Lulu has no idea where Dante (Dominic Zamprogna) is or when he’ll be back. General Hospital spoilers say Zamprogna will reprise his role soon, but it’ll be for a special involving Sonny (Maurice Benard). Dante will be part of episode that reimagines Sonny’s life without violence, so it’s not like he’s making a real Port Charles comeback.

Unless Dante pops up for another surprise later, he’ll remain who knows where doing who knows what. With that in mind, Lulu will be left to pine. It sounds like she’ll end up thinking about the good old days. On November 20, GH spoilers say Lulu and Maxie will ponder the past together. They’ll probably mull over how things used to be when they were happy with Nathan and Dante.

This time of contemplation could drive Maxie and Lulu’s next chapters. The purpose for Maxie may be to see if she can move on. She’s been growing closer to Peter (Wes Ramsey) again, but is she ready to take the plunge and start a new romance?

Part of Maxie will feel like she’s betraying Nathan in some way. Reflecting on their relationship could add to that inner struggle, but maybe it’ll help her work through her feelings. At some point, Maxie will have to let go and fall in love again.

This could jumpstart Lulu’s need to move on as well. It may take a while longer, but Lulu’s heartache will bring serious trouble. Without Zamprogna’s lengthy return or a Dante recast, Lulu will have no one to hold. How many lonely nights can she take?

General Hospital will inevitably put someone new with Lulu sooner or later. Chase (Josh Swickard) still seems like a good option. He’s most likely destined to lose the battle for Willow’s (Katelyn MacMullen) heart. She already appears to be pulled in Michael’s (Chad Duell) direction, so Chase may find himself drawn to Lulu instead.

Whatever the case, Maxie and Lulu have bright futures ahead. They just have to get through some lingering sorrow first! We’ll give you updates as other GH news comes in. Stay tuned to the ABC soap and don’t forget to check CDL often for the latest General Hospital spoilers, updates and news.