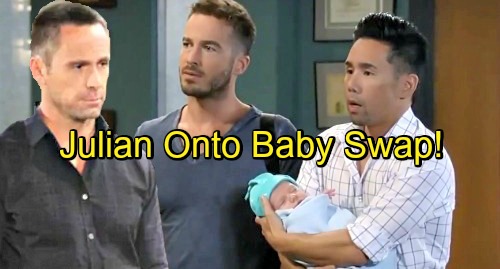 General Hospital (GH) spoilers tease that Julian (William deVry) could be on the verge of a stunning discovery. During the Thanksgiving festivities, Brad (Parry Shen) spoke on the phone with Julian briefly. He suggested he was settling down a bit, which was music to Julian’s ears. Brad admitted that he’s made peace with his choices and knows “Wiley” is right where he needs to be.

Of course, Julian’s relieved since he’s busy dealing with all the Kim (Tamara Braun), Oscar (Garren Stitt) and Alexis (Nancy Lee Grahn) drama. He must feel like he’s putting Brad’s crisis behind him, but that’s far from the case. There’s much more chaos to come in this GH storyline.

General Hospital spoilers hint that Brad’s lulling himself into a false sense of security. That could definitely get him in trouble soon enough. Michael’s (Chad Duell) closer to “Wiley” than ever and Willow (Katelyn MacMullen) just might be the anonymous birth mom. The truth could be dangerously within reach if they open up to each other.

Liesl Obrecht (Kathleen Gati) should also come back in the picture soon. Brad doesn’t know she’s in the loop on the live baby Nelle (Chloe Lanier) gave birth to. Liesl delivered the kid herself, so she poses a threat that Brad’s completely unaware of. You can bet Dr. O’s comeback will bring some unexpected complications.

However, General Hospital will have to let Julian in on the big secret at some point. He believes Brad switched dead Wiley for a baby that a random woman couldn’t take care of. In reality, Brad swapped him for Jonah – the grandson of Julian’s enemy!

Would Julian be so cooperative if he knew the whole story? Would he allow Brad to hurt Michael and risk Sonny’s (Maurice Benard) wrath? Julian may not have been on board with that at first, but Brad’s in too deep now. If Julian indeed learns the Nelle details, he might choose to keep his mouth shut anyway. Julian probably wouldn’t be able to destroy Lucas’ (Ryan Carnes) happy family like that.

Nevertheless, the bomb has to drop on the Corinthos clan eventually. When it does, it could reignite Julian and Sonny’s war in a big way. General Hospital spoilers say Julian will hit the roof on December 5, so it’s possible some Brad-related news will upset him. Brad may get an earful for leaving out his Nelle shocker!

GH fans won’t want to miss all the twists and turns ahead. We’ll give you updates as other info emerges. Stay tuned to the ABC soap and don’t forget to check CDL often for the latest General Hospital spoilers, updates and news.