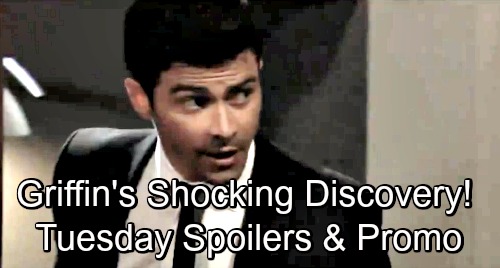 General Hospital (GH) spoilers for Tuesday, November 27, tease that Kim (Tamara Braun) will remain at odds with Julian (William deVry). He promised to help with Oscar’s (Garren Stitt) kidnapping, but he didn’t really plan to let it get that far. Kim will blast Julian over his lack of support and insist that this was her call to make. She won’t appreciate Julian acting like he knows what’s best for her son.

Meanwhile, an emotional Josslyn (Eden McCoy) will open up to her mom. She’ll fill Carly (Laura Wright) in on Oscar’s illness and how he’s refusing the clinical trial. General Hospital spoilers state that Carly will offer some advice. She’ll suggest that Josslyn spoke her mind along with Drew (Billy Miller) and Kim, but now it’s Oscar’s turn to make his own choice.

At the Quartermaine mansion, Oscar will have an announcement to make. Before he joins Drew and the rest of his family, he’ll want to share his huge news. Did Josslyn get through to Oscar? Has he decided to give himself a fighting chance after all? Drew and Kim will certainly hope so!

Other General Hospital spoilers say Stella (Vernee Watson) will cause quite a stir. She just showed up at the wedding to speak her piece, so Curtis (Donnell Turner) and Jordan (Briana Nicole Henry) will just have to listen up. Fortunately, it looks like Stella will go easy on them. She’ll be in a good mood thanks to the holiday festivities, so Jordan and Curtis should get her blessing.

Stella will most likely provide the “something old” Jordan needs as well. Perhaps she’ll have a family heirloom she can pass along to complete the nuptials. However, the fact that Stella’s there at all will mean the world to Curtis. Jordan will also be grateful for Stella’s support at their beautiful Thanksgiving ceremony.

Elsewhere, Laura (Genie Francis) will voice her frustration to Lulu (Emme Rylan). She feels like she doesn’t even know “Kevin” (Jon Lindstrom) anymore. Of course, that’s because Ryan is posing as his twin brother. Since Laura will stay in the dark for now, she’ll vent to Lulu about “Kevin’s” kiss with Ava (Maura West) and get a shoulder to cry on.

Over with Maxie (Kirsten Storms) and Peter (Wes Ramsey), they’ll enjoy some warm moments. Their connection will grow stronger, so they’ll continue down this romantic road. At home, Griffin (Matt Cohen) will arrive looking for Kiki (Hayley Erin). He’ll call out her name as he looks around, but what will he find?

Ryan showed up to Kiki’s apartment in Monday’s GH episode. Is he there to kill or just put some fear in Kiki? General Hospital spoilers point to Kiki being killed off eventually, but is the time now? It’s possible Ryan will simply chew Kiki out over Ava and offer an ominous warning. This could be a fake-out to keep the drama going a bit longer.