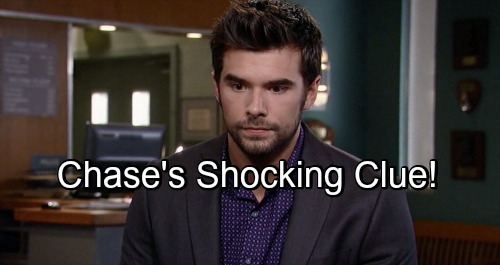 General Hospital (GH) spoilers tease that Chase (Josh Swickard) will inch toward the truth and straight into danger. He could easily drag some other characters into peril as well. GH fans know Mary Pat’s (Patricia Bethune) murder has been a real head-scratcher for the PCPD. Thanks to Ryan’s (Jon Lindstrom) creative tactics, they’re truly stumped about who the culprit might be.

Of course, Jordan (Briana Nicole Henry) didn’t do herself any favors by asking “Kevin” for help. She doesn’t realize she’s turned to the killer himself for advice! Ryan let Jordan know how crucial it was keep him in the loop. He suggested they had to stay a step ahead of the murderer, but that’s for his benefit, not the PCPD’s.

General Hospital spoilers say Jordan will follow a new lead on December 3. The next day, Chase will uncover a shocking clue. It sounds like Jordan will point Chase in the right direction. There’s no word yet on what Chase will find, but it’ll put him closer to the truth. Chase won’t solve the mystery anytime soon, but he’ll definitely have a lot to mull over.

In fact, both Chase and Jordan will become pretty obsessed with this case. Mary Pat’s head was found floating in the apple-bobbing barrel at a fundraiser. Her body was set up at Ava’s gallery and had clumps of Carly’s (Laura Wright) hair in her hands. Since Carly had a solid alibi, Jordan and Chase know it was a setup. They just don’t know if the killer meant to frame Carly or simply throw them off the trail.

Chase’s upcoming clue may not help him figure that out, but he’ll keep trying. He’ll feel like there must be something he’s missing. On December 6, Chase will dig a little deeper. He’ll take what he’s learned so far and hope to get some real answers. Since GH is really revving up this investigation, we could see a huge break in the case soon enough.

What happens if Chase cracks the case or at least ends up on the verge of it? Will he find himself in harm’s way? If Jordan blabs about how close Chase is getting, Ryan could take action against him. General Hospital probably doesn’t plan in killing Chase off, but that doesn’t mean he couldn’t suffer serious injuries.

Since Chase is trying to start a romance with Willow (Katelyn MacMullen), she could face a dangerous situation as well. General Hospital spoilers say this storyline will come with some crazy twists, so don’t miss all the hot drama. We’ll give you updates as other news comes in. Stick with ABC’s GH and don’t forget to check CDL often for the latest General Hospital spoilers, updates and news.