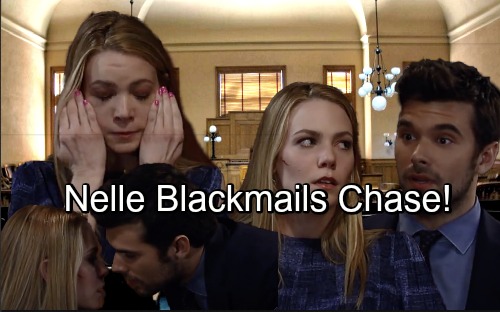 General Hospital (GH) spoilers tease that instead of turning from her wicked ways, Nelle Benson (Chloe Lanier) will dig her heels in and start another scheme. It appears her next one could involve Harrison Chase (Josh Swickard). These two have quite a history together, so expect Nelle and Chase to remain connected. Now that they’ve crossed paths in Port Charles, they’re sure to meet again and again.

During a heated confrontation, Chase recapped the details of his backstory with Nelle. He was helping with the Zackary Grant murder case, but he got involved with Nelle as the evidence started to mount. By the time Chase realized what had truly gone down, he was already falling in love with her.

It sounds like Nelle seduced Chase in hopes of avoiding punishment. She’s probably the one who reported Chase for his inappropriate behavior. Thanks to Nelle, Chase had to start his career over and work his way back up. He nearly lost everything and she broke his heart to boot!

It’s clear that Nelle always does whatever it takes to protect herself. If that means taking down everyone else in her path, then so be it. Chase became her target because it served Nelle’s sneaky agenda. The plan kept her out of prison, so she did what she had to do.

Now that Chase has resurfaced as a threat, Nelle just might have to target him once more. She’ll do her best to keep her dreams intact. Of course, that could mean playing dirtier than ever. When it comes to Nelle, there’s no such thing as sinking too low!

Chase seemed upset as he gazed at an old photo from happier times. He can’t believe he let his world be torn apart by Nelle’s cruelty. Chase may make it his mission to take Nelle down, but will she turn the tables? Nelle will definitely need a way to handle her vengeful former flame.

General Hospital spoilers say Nelle’s got the perfect blackmail setup. She suggested that Chase was stalking her, so she could vow to take her accusations to the cops if necessary. Nelle may point out that considering Chase’s previous violation, it won’t look good if she causes a fuss. Chase is still a newbie at the PCPD, so they could cut him loose if they think he’s not worth the trouble.

GH fans can watch Michael (Chad Duell) and Dante (Dominic Zamprogna) get a clue soon. They’ll find out about Chase and Nelle’s link, so they’ll naturally demand some answers. Chase may explain the situation and hope this will all die down. The last thing he wants is to put his career in jeopardy again.

However, Chase once had a weak spot for Nelle. He’d better be careful not to get sucked back in. Any little slipup – or hookup – could be used against him. General Hospital spoilers say Nelle will hold nothing back in her latest plot. We’ll give you updates as other GH news comes in. Stick with the ABC soap don’t forget to check CDL often for the latest General Hospital spoilers, updates and news.