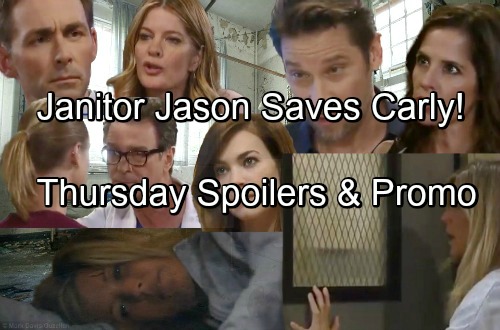 General Hospital (GH) spoilers for Thursday, June 14, tease that Kiki (Hayley Erin) will face off with Dr. Bensch (James DePaiva). He’ll probably make some snide remarks about the story that was published and once again deny any wrongdoing. A fuming Kiki will insist that they should just “cut the crap.” She’ll lash out at Dr. Bensch before ordering him to stay away. Kiki isn’t messing around!

Meanwhile, Alexis (Nancy Lee Grahn) will have another session with Kevin (Jon Lindstrom). She’s already been fretting over her choice of men. Now Valentin (James Patrick Stuart) is stirring up all this family drama, so Alexis’ stress is intensifying. She’ll just want Kevin to explain what’s wrong with her, but she’s really no more messed up than anyone else in Port Charles.

Over with Sam (Kelly Monaco) and Curtis (Donnell Turner), they’ll mull over their latest discovery. After digging around at Wyndemere, they managed to find some intriguing paperwork. On Thursday, they’ll determine that it could be proof of Valentin’s guilt. Sam will suggest that Valentin helped sneak Peter (Wes Ramsey) out of the country, but these private investigators have got it all wrong.

Liesl (Kathleen Gati) is still holding Peter hostage and Nina’s (Michelle Stafford) a co-conspirator, so that secret has to come out eventually. For now, Nina will spend a few minutes ranting at Valentin. He’s putting up a fight on the divorce, so she’ll make it clear that she’s not changing her mind. Nina will insist that Valentin betrayed her trust and there’s no going back.

Of course, Nina could soften sooner or later. General Hospital fans know Valentin tends to be her weak spot, so never say never on a reunion. Back at GH, Franco (Roger Howarth) will seek answers from Liz (Rebecca Herbst). She’ll seem upset about his decision to contact Sarah, so Franco will just want to understand. He’ll urge Liz to tell him what’s going on, but she may remain vague about the situation.

At Ferncliff, Carly (Laura Wright) will see a familiar face. When she peers out her window in the super max wing, she’ll spot Jason (Steve Burton) nearby. He scored a job as a janitor, so at least Carly will have someone on the inside. She’ll be relieved, but strict Mary Pat (Patricia Bethune) could still be a problem.