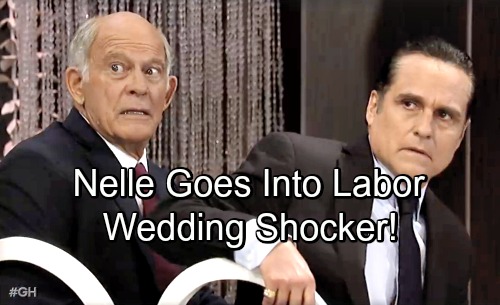 General Hospital (GH) spoilers tease that Michael (Chad Duell) and Nelle’s (Chloe Lanier) wedding could take a shocking turn. Nelle’s anxious to lock in a future with her rich “baby daddy,” but Chase (Josh Swickard) will work hard to plant seeds of doubt. Despite Nelle’s initial fears, she’ll push through them and focus on what she stands to gain from this marriage.

Later, Michael will pay Alexis (Nancy Lee Grahn) a visit and presumably change his will. Since the plan involves faking his death, Michael has to go through the motions here. He’s setting the stage for disaster, but there could be a mini catastrophe to handle first.

General Hospital spoilers say Michael and Nelle will scramble to finish wedding preparations. They’ll wrap things up quickly and come together for a lovely ceremony. Of course, it’ll only be lovely to Nelle! Michael will plaster on a smile, but it’s clear that he hates Nelle’s guts. Jason (Steve Burton), Sonny (Maurice Benard) and the Ferncliff-confined Carly (Laura Wright) won’t be happy either. 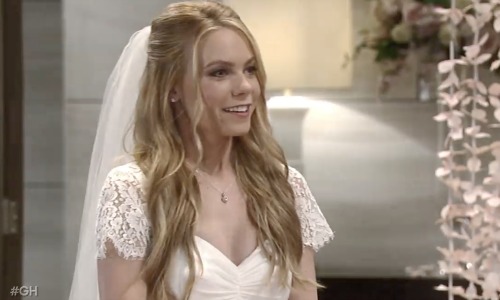 Even Josslyn (Eden McCoy) may have some reservations at that point. After all, this is happening way too fast. Joss may worry that Nelle and Michael are setting themselves up for a failed marriage. Nevertheless, Nelle will be a glowing bride on her big day. She’ll feel like nothing can stop her from becoming Mrs. Michael Corinthos.

However, we can’t ignore the fact that Nelle’s VERY pregnant. She looks like she could give birth any minute now. Soaps are notorious for wedding drama, so this seems like the perfect moment for contractions to start.

To back that idea up, General Hospital spoilers say Nelle will face a stunning setback on new GH episodes this week, July 9-13. It’s easy to imagine Nelle going into labor before she can say “I do.” That might throw off her own plan as well as Chase and Michael’s scheme.

On the bright side, Michael could be assured of his child’s safety before he moves forward. Once the kid’s born, he can focus on taking Nelle down without risk to his little one. Whatever the case, GH fans are definitely on baby watch!

Do you think Michael and Nelle’s bundle of joy will derail their wedding? Will Nelle go into labor and have to put the ceremony on hold? We’ll give you updates as other GH news comes in. Stay tuned to the ABC soap and don’t forget to check CDL often for the latest General Hospital spoilers, updates and news.