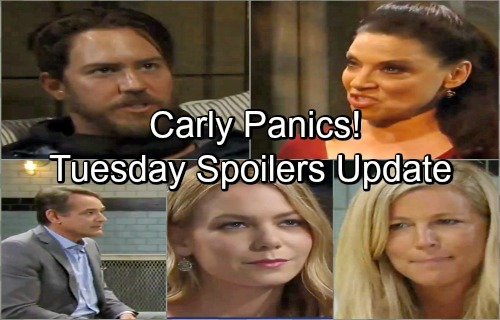 General Hospital (GH) spoilers for Tuesday, July 10, tease that Michael (Chad Duell) will take the next step. Thanks to Nelle (Chloe Lanier), they’re prepared to tie the knot tomorrow. Michael will bring Jason (Steve Burton) and Sonny (Maurice Benard) up to speed, so they’ll have a chance to react. They knew this was coming, but it’ll still be a lot to wrap their heads around.

Nevertheless, Sonny will support Michael’s decision and believe that he’s got this. He’ll encourage a fearful Jason to do the same. Meanwhile, Carly (Laura Wright) will still be having a fit in Ferncliff. She can’t stand Nelle and she’s not on board with Michael taking such a huge risk.

Carly will share her concerns with Kevin (Jon Lindstrom) and contend that she could’ve taken Nelle down. Before her Ferncliff stint, Carly was simply trying to promote peace for Michael’s child. That plan obviously didn’t work out very well.

During Carly’s last faceoff with Nelle, phony friendliness and sarcasm were her weapons of choice. Carly’s determined to get out of there, so she can’t let Nelle cause any setbacks. Unfortunately, Carly will still be stuck for a while. She’ll feel helpless as Michael remains tangled up with the enemy.

Over with Chase (Josh Swickard), he’ll try to help Nelle see the light. General Hospital spoilers say Nelle will be pretty rattled by Chase’s comments. He’ll explain why Michael and Nelle’s marriage spells disaster, so she’ll definitely have something to think about.

At the cabin, Peter (Wes Ramsey) will continue to plead with Nina (Michelle Stafford). Liesl Obrecht (Kathleen Gati) put this kidnapping plot in motion, so Peter’s willing to give Nina a pass. All she has to do is let Peter go and he won’t implicate her. However, Nina won’t trust Peter to keep his word. It doesn’t look like Peter will score his freedom just yet.

Other General Hospital spoilers say Franco (Roger Howarth) and Finn (Michael Easton) will seek the cabin. Before they track it down, Franco will wonder why Finn’s so interested in assisting him. He’ll note that Finn doesn’t care about Peter (Wes Ramsey) at all, but that’s not exactly the case. Anna (Finola Hughes) cares, which means Finn cares, too. He can’t stand by and let Anna’s son die.

Plus, Dr. Finn would help just about anyone in need. That’s especially true when evil Obrecht’s involved. She was sweet with little James, but she’s a full-blown menace when she’s with her adversaries! It appears Dr. O and Finn will have a showdown on Tuesday’s GH episode. She’ll rant at her “stalker,” so she probably won’t be happy about Finn barging in her hideout.

Finally, Curtis (Donnell Turner) will sit down for a meeting with Sam (Kelly Monaco). She stumbled across a clue that could aid their investigation, so he’ll want to hear all about it. Will they discuss a hint about Peter’s location? We’ll give you updates as other GH news comes in. Stick with the ABC soap and don’t forget to check CDL often for the latest General Hospital spoilers, updates and news.