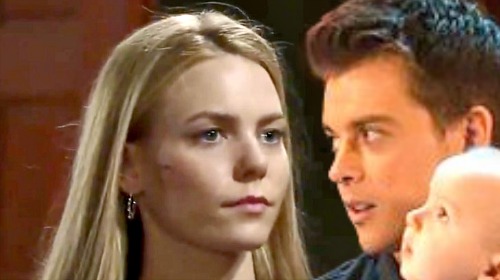 General Hospital (GH) spoilers tease that Nelle (Chloe Lanier) will return for a popup appearance this week. She’ll resume her usual dirty tricks on Thursday’s new GH episode, November 8, but Michael (Chad Duell) will express reluctance the day before. Does that mean Nelle will get in touch and ask Michael to visit her?

Michael wants nothing more to do with Nelle, but she’s itching to cause trouble. Nelle can’t stand it if she isn’t stirring the pot. Besides, she might think her secret could help her. Nelle knows their baby is alive and well, so what can she do with that? Continuing to taunt and torment Michael would be fun for Nelle, but that’s about it. She won’t be able to change her situation.

Nelle might offer a riddle or two and convince Michael to come see her. She could promise that it’d be worth his while. General Hospital spoilers say Michael will try to avoid another mess, but he may not be able to resist. Curiosity can lead people to do things they don’t always want to do.

Michael understands what Nelle’s capable of, so he might think a meeting is necessary. Nelle may be behind bars, but her threat never really goes away. If nothing else, Michael might want to stare Nelle down and insist that this has to stop. He could contend that Nelle needs to leave his family alone for good.

However, GH wouldn’t bring Nelle back on without a goal in mind. She’ll undoubtedly provide another crucial hint for Michael to mull over. If Nelle gets desperate enough, she might even blurt out that their child survived. That could lead Michael to shut down the idea and argue that Nelle’s crazy. He might think she’s gone too far by spouting off lies about their “dead” son.

Nelle may want to make some sort of deal for information. Now that she’s been sentenced, she’ll be stuck in prison for many years – unless she can find some leverage and bargain her way out. Nelle actually has that leverage already. She could help Michael reunite with Jonah, but perhaps only if she gets her freedom.

Unfortunately, Michael may not stick around to listen. He might cut off the conversation and refuse to have any more contact with Nelle. This would be the perfect way to have the truth right in front of Michael. It makes sense that he wouldn’t believe Nelle’s claims without the full story. He thinks he held his cold, lifeless baby in his arms!