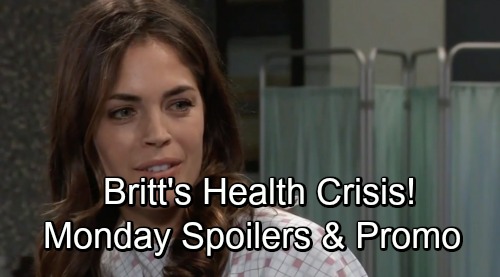 General Hospital (GH) spoilers for Wednesday, November 6, tease that Lucas (Ryan Carnes) will grow increasingly concerned. It looks like he’ll have Brad (Parry Shen) on his mind, so he’ll open up to a loved one about it. Lucas will hint that Brad’s terrified about something. He may sense that Brad still feels like their family could be yanked away in an instant.

Elsewhere, Brad will indeed be on edge. He’ll continue to struggle, but he’ll have to shift his focus. Julian (William deVry) will insist that after he’s gone, Lucas is going to need Brad’s help. Perhaps Julian will point out that he can’t watch out for his son forever. He can’t clean up Brad’s messes indefinitely either, so Brad needs to get his act together.

Meanwhile, Britt (Kelly Thiebaud) will take a trip to GH. She’ll get examined by Finn (Michael Easton), but she’ll argue that she’s perfectly healthy. However, Finn will suggest that won’t be the case for long. Britt will be puzzled, but it probably won’t be anything serious. Finn’s expression won’t seem too fearful, so he might make some crack about all the people in Port Charles who could do damage.

Other General Hospital spoilers say Curtis (Donnell Turner) will get suspicious. He’ll talk to a poll worker as he looks at something confusing. It appears Spencer’s (Nichol Bechtel) behind some vote tampering, so Curtis might be on the verge of figuring it out.

Michael (Chad Duell) will also hang out with “Wiley” on Wednesday. He won’t realize he’s bonding with his own son, but the truth has to come out sooner or later. In the meantime, Michael will likely chat with Laura (Genie Francie). He’ll ask someone if he or she has reconsidered, so this could be about her write-in campaign.

Laura thought about backing out of the whole idea, but Lulu (Emme Rylan) and Spencer changed her mind. Now she’s all in again and things may go well initially thanks to her sneaky grandson. Of course, there’ll be some trouble when Ned (Wally Kurth) confronts Laura.

Spencer will quickly intervene and urge Laura not to fall for Ned’s trap. He’ll be desperate to protect his own secret, but Charlotte (Scarlett Fernandez) will put it in jeopardy. She’ll stumble across a few clues and realize Spencer’s used some dirty tricks to help Laura.

Finally, Chase (Josh Swickard) will encounter a familiar face. He’ll spot Willow (Katelyn MacMullen) in town and wonder if she’s playing hooky from work. Chase will joke that he could arrest her for that, which might earn a laugh from Willow. They’ll flirt a bit, so we’ll see if it works out. Chase may gather up the courage to ask Willow on a date.