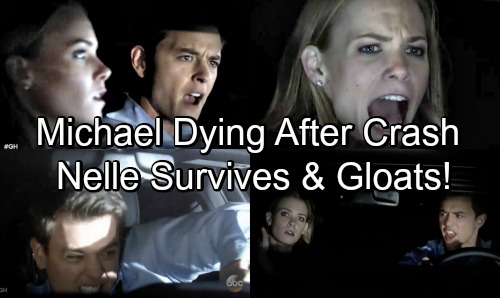 General Hospital (GH) spoilers tease that Michael (Chad Duell) and Nelle (Chloe Lanier) will get into a fierce argument. GH’s latest promo offers some great clues. As they fight in the car, Michael will shout that Nelle took everything from his family. Nelle will fidget with her hair and look at the road nervously. Perhaps that’s a tipoff that Nelle isn’t supposed to be with Michael at the time.

If Nelle goes into labor, that could force her to get in the vehicle. She may worry that she’ll get caught in the crash she set up. Of course, Michael’s been planning to fake his death with Chase’s help. They wouldn’t need a full-fledged accident for that. Chase and Michael would just need to stage the aftermath in some way. They obviously wouldn’t want Nelle around to know about their ruse.

In other words, something’s fishy about this whole scenario. General Hospital spoilers say the plot will go horribly wrong, so maybe this is how. Jason (Steve Burton) keeps pointing out that Nelle has options. She doesn’t necessarily have to use Chase (Josh Swickard) to do her dirty work.

Nelle could just as easily turn to someone else for assistance. She got some vagrant to pitch in with her Carly (Laura Wright) “haunting” scheme. That only cost Nelle a case of alcohol. If Nelle finds the right person and offers the right incentive, she won’t need Chase to make this happen.

After Nelle urges Chase to kill Michael, she may sense that her former flame isn’t up to the challenge. Nelle might fear that Chase will chicken out and leave her stuck in her current predicament. She could even sense that Chase is playing her.

Nelle always thinks she’s smart enough to get away with her actions, so she may move forward with her deadly plot anyway. Of course, she may not know when her hit man’s going to strike. That could explain Nelle’s apparent anxiety in the car.

Then again, this would be just a plain old accident. Perhaps the danger will just be a soapy coincidence. Whatever the case, General Hospital spoilers say Nelle will warn Michael to watch out. She’ll start to panic as he swerves off the road.

GH fans can probably expect severe injuries for Michael. We’ll see some doom-and-gloom attitudes for Michael’s loved ones in the coming weeks, so it makes sense that he’ll be near death. As for Nelle, she may get out relatively unscathed.

General Hospital spoilers state that Nelle will mock everyone around her on August 7. She’ll do plenty of taunting, so Nelle may think she’s going to get everything she wants. There’s no word yet on whether the baby will survive, but that probably won’t even matter to Nelle. She doesn’t seem to truly care about this child.

Nelle will probably believe she’s going to rake in all that Quartermaine and Corinthos cash. Since the will presumably won’t be filed yet, Nelle will think she’s really got it made. Too bad that marriage license was likely signed with disappearing ink! It looks like Jason’s move will stop Nelle from getting the payday she craves.