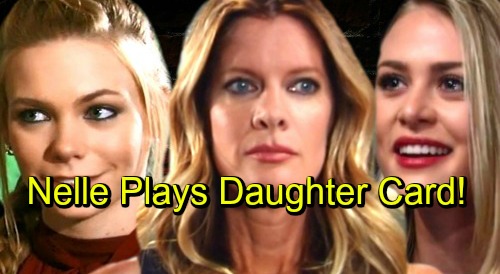 Sasha almost seems too convenient, but she does have one thing that works in her favor. She was very much against the idea of all this. Sasha didn’t think Curtis’ claims added up and had no interest in looking into the birth mom situation. She agreed to the DNA tests, but only to disprove Curtis’ theory.

If Sasha turns out to be Nina’s kid, they’ve already set up some excellent drama. Perhaps Sasha still wouldn’t want anything to do with her. However, General Hospital also offered some clear hints about Kiki (Hayley Erin). They certainly want us to believe Kiki could be the daughter Nina’s seeking. That would bring some interesting Ava (Maura West) mayhem and turn Kiki’s life upside down.

Nevertheless, the Sasha info and Kiki hints came pretty early in the story. Maybe General Hospital’s trying to throw everyone off track. By making viewers focus on these two options, they could deliver a real surprise later. GH may hope that when Nina’s daughter ends up being someone else, fans will never see it coming.

Nelle’s (Chloe Lanier) exit was left open-ended, so she’ll undoubtedly be back at some point. Since she’s around the right age and has a complicated history with Nina, she’d be an interesting choice, too. General Hospital fans know how much Nina has longed for a child of her own. We also know how manipulative Nelle can be!

If Nelle finds out she’s Nina’s daughter, you can bet she’ll use that to her advantage. It’s easy to imagine Nina visiting Nelle to discuss the news. Nelle could turn on the waterworks and assure Nina that she wants a relationship with her. She’s just got to get out of that pesky prison and they can be the mother-daughter besties Nina’s always dreamed of. At least that’s what Nelle would claim!

Nina and Nelle had a falling out, but that’s something Nina could get past. She had a sweet bond with Nelle once upon a time. After Nelle was mugged, Nina visited her at GH. She felt sorry for Nelle since she didn’t have any family to call. Nina got choked up and promised that she was on Nelle’s side.

Everything fell apart later, but Nina might decide there’s hope for redemption. She could get suckered just like Michael (Chad Duell) did over and over again. Would Nelle convince Nina to help her get off the hook? Valentin’s (James Patrick Stuart) a powerful man who might pitch in against his better judgment.