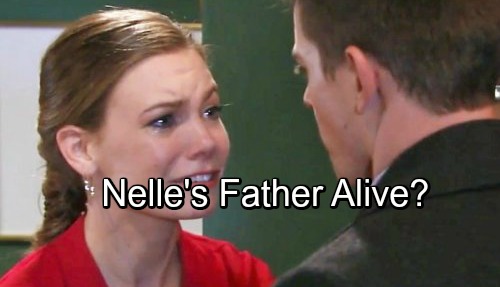 General Hospital (GH) spoilers tease that Nelle (Chloe Lanier) has plenty more tricks in store for Carly (Laura Wright). She just can’t rest until she gets her enemy out of her life, but what if another enemy resurfaced? It would certainly throw Nelle for a loop if her dead dad suddenly turned up alive!

Frank Benson’s appearance would make matters worse for Carly as well. We can’t forget that Carly is Nelle’s adoptive sister. GH fans will recall that Nelle came to town seeking revenge for the kidney Carly never paid for. She believed all the lies her dad had told her. In the end, Nelle realized that her father took mega bucks from Jax (Ingo Rademacher) and gambled every penny away.

General Hospital viewers know what Carly’s reaction would be if she saw Frank in Port Charles, but what about Nelle’s? Was the deception she uncovered enough to turn her against her father for good? Frank basically brainwashed Nelle her entire life. She was always desperate for love, so she bought whatever he sold her. It’s easy to imagine Frank saying all the right things and winning Nelle over again.

Of course, you might be wondering how Frank could’ve survived and why he would stir up trouble now. There’d be an easy explanation for this return-from-the-dead story. General Hospital could argue that Frank was in debt with the wrong people and had to fake his demise. He never cared about Nelle, so he wouldn’t have minded walking away from her.

As for why Frank might pop up after all these years, the answer would once again be money. Nelle’s about to give birth to a baby with both Quartermaine and Corinthos ties. There’s loads of cash just waiting for Frank to make a play for. He could fib about wanting to make amends with Nelle and meet his grandkid, but he’d actually be after all that dough.

Nelle might be tempted to forgive her dad and finally have a connection to someone again. It has to be lonely for Nelle in PC. Her only sort-of friends are her boss and a teenage girl. Ava (Maura West) and Josslyn (Eden McCoy) are nice enough, but Nelle knows they could both turn on her in an instant. She’d love to have some family loyalty for once. Frank might convince Nelle that he’s on her side.

Naturally, Carly wouldn’t want Michael’s (Chad Duell) child anywhere near Frank. She doesn’t even want the kid around Nelle! This could lead to more drama at first, but it could also help Nelle and Carly bond down the road.

Once Frank inevitably showed his true colors, Carly might determine that this guy really did mess Nelle up. She could have some sympathy after seeing Frank manipulate Nelle before her very eyes. All of this is still speculation at this point, but it sounds like it’d be an intriguing storyline!