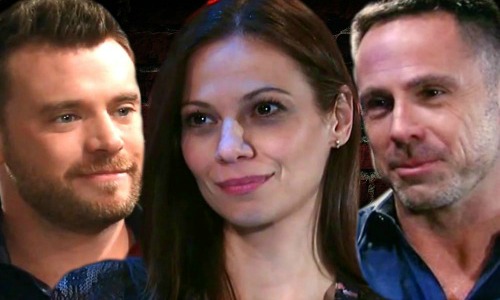 General Hospital (GH) spoilers tease that Kim (Tamara Braun) may soon find herself in quite the pickle (and she’ll have that pickle with ice cream, “Charlie”)! GH viewers will recall that Julian (William deVry) and Kim slipped off into his live-in office quarters and had a hot romp in his pull-out bed. They agreed to live in the moment and keep things casual, but they certainly enjoyed their steamy night together.

Olivia (Lisa LoCicero) saw the lovers sneaking away, so she might be worried about Julian knocking up his Alexis (Nancy Lee Grahn) substitute. General Hospital fans know Olivia wouldn’t trade Leo for the world, but she definitely wishes he had a different father. She’d hate to see Kim go through all the same drama.

Kim admitted that she never really fell for anyone else after her brief romance with Drew (Billy Miller) ended. Since Kim’s been busy pining for her former flame, she probably hasn’t had a lot of action over the years. It’s possible that Kim hasn’t bothered with birth control. Julian was pretty anxious to get Kim under the sheets, so he may have skipped the condom as well.

If there was no protection involved and Kim ends up pregnant, she’ll be a real hypocrite! She gave Oscar (Garren Stitt) a lengthy lecture about being prepared. How will Oscar react if his preachy mom, who happens to be a gynecologist and obstetrician, wasn’t prepared herself?

That’s not the only embarrassing situation Kim might face. We can’t forget about Drew, who’s apparently the great love of her life. Deep down, Kim must be hoping Drew and Sam’s (Kelly Monaco) split will work in her favor. She’d love another shot with the man she desires.

Scout is Drew’s daughter and Julian’s granddaughter, so Kim’s potential baby could make the family tree complicated. If she were to reunite with Drew and marry him, the kid would have Scout as both a stepsister and a half-aunt or uncle. Talk about a genealogist’s nightmare! How would Kim explain to Drew that she’s pregnant by his father-in-law (or possibly soon-to-be ex father-in-law)?

For Julian, having a baby with Kim might be welcome news – at least after he had time to process it. This would give him the chance to interact with his child from babyhood on. Of course, Drew could derail that plan. He could easily convince Kim that Julian would be a threat to her child. Julian could end up in the same boat he’s been in with Olivia.