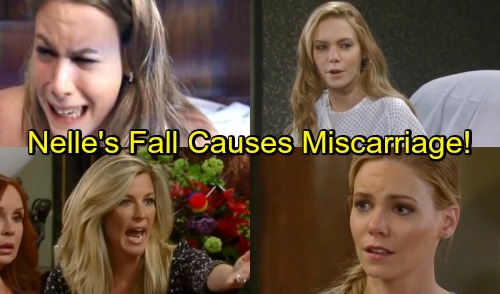 General Hospital (GH) spoilers tease that Nelle (Chloe Lanier) will find herself in a dire situation. She’ll pull off her baby shower plot, but the backlash will be brutal. Carly’s reaction will be far worse than Nelle could’ve imagined. It’s tough to rattle a confident go-getter like Nelle, but unhinged Carly just might do it.

After Nelle sets up some Morgan (Bryan Craig) reminders at the party, Carly might suspect that she’s behind the recent “hauntings.” Even if Carly doesn’t get the full picture, she’ll still find plenty of reasons to be angry. Nelle suggested naming the baby “Morgan” not too long ago. An upset Carly saw right through Nelle’s fake act of remembrance. 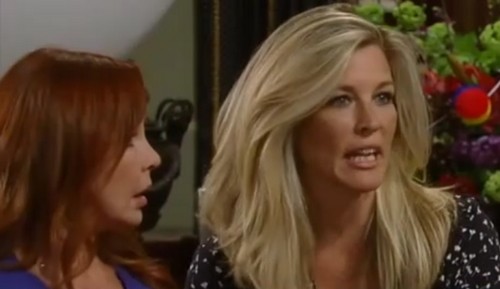 Once the gifts point to Morgan memories, Carly will simply think Nelle’s pushing her buttons. She’ll undoubtedly confront Nelle in the middle of the shindig. General Hospital spoilers say Nelle will deny everything, but Carly will continue her outburst. She’ll really go off on Nelle and it’ll cause a horrible fall down the staircase. Nelle will take a tumble and potentially harm her baby in the process.

General Hospital spoilers say Nelle will need a trip to GH emergency immediately. Kim (Tamara Braun) will hopefully be on call, but there’ll be other staff members ready to care for Nelle as well. They’ll do their best to make sure both Nelle and her son or daughter get through this. 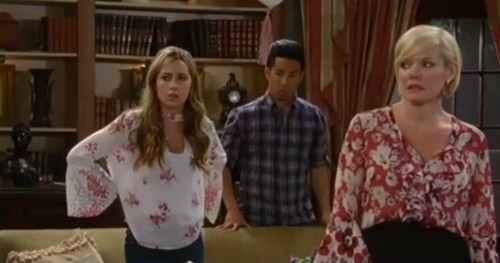 Of course, this might be a great time for another May sweeps shocker. Many GH fans suspected Nelle would lose this baby long ago. She’s not exactly mother material! There have been miscarriage suspicions for months and it’s obviously not too late to make it happen. In fact, a miscarriage at this stage would make it even more devastating.

Nelle seems like she’s looking forward to having a little one. Losing the baby would be a crushing blow, but Nelle wouldn’t have too long to grieve. She’d have to think fast in hopes of keeping her dreams intact. Without this kid, Nelle probably has no hope of a future with Michael (Chad Duell).

Will Nelle somehow fudge the facts with Michael and fake the remainder of her pregnancy? Will she buy some time and ultimately replace her baby with a stolen one? We’ll give you updates as other GH news comes in. Stay tuned to the ABC soap and don’t forget to check CDL often for the latest General Hospital spoilers, updates and news.