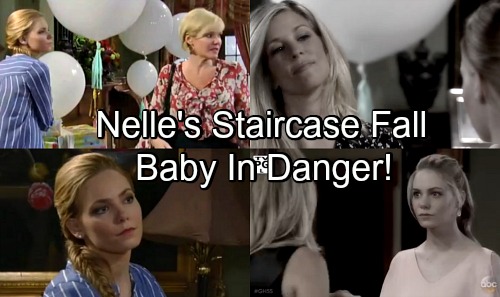 General Hospital (GH) spoilers tease that Nelle’s (Chloe Lanier) sneaky plan will go horribly wrong. Ava (Maura West) has definitely been concerned about whatever Nelle’s got cooking. She doesn’t want to get mixed up in this mess. There’s too much at stake now that Ava has joint custody of Avery (Ava and Grace Scarola).

However, Nelle has assured Ava that there’s no need to worry. Carly’s (Laura Wright) the only person she intends to take down at her baby shower. Nelle promised it would be “epic,” but what does she have in mind? The first part of the plot will likely involve the baby blanket she’s so proud of. Maybe it’s nearly identical to the one Carly used to wrap little Morgan (Bryan Craig) in. 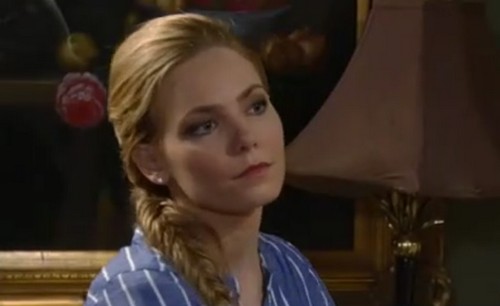 Nelle also wants Ava to hand her a significant gift at the event. Whatever’s inside could trigger a flood of emotions for Carly. Nelle fully expects a meltdown and she’s going to get her wish. Unfortunately, Nelle hasn’t considered the potential consequences of all this. She can’t predict what Carly will do once she’s riled up.

Of course, we can predict that for you! General Hospital spoilers say Carly will lose all control and that’ll lead to extreme danger for Nelle. It seems Carly will blame Nelle for intentionally causing party drama. Carly may feel like Nelle set out to hurt her and that’s exactly what’s going on. 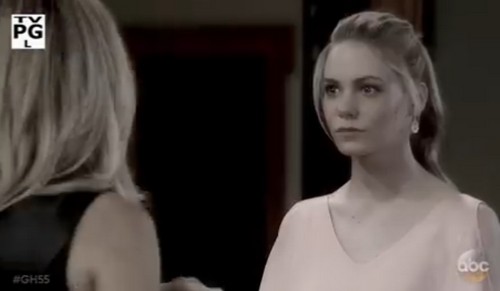 Nelle may try to settle Carly down in front of the others. She’ll want to look like a hero in the midst of the mayhem. Alas, Nelle will become a victim of her own scheme. It appears a confrontation will happen near the staircase, so you can guess where this is headed. GH spoilers hint that Nelle will take quite a tumble, which means her baby will be at risk. There’s no guarantee the kid will survive this fall.

Carly’s freak-out will bring ramifications for herself as well, so stay tuned for all the shockers ahead. We’ll give you updates as other General Hospital news comes in. Stick with ABC’s GH and don’t forget to check CDL often for the latest General Hospital spoilers, updates and news.