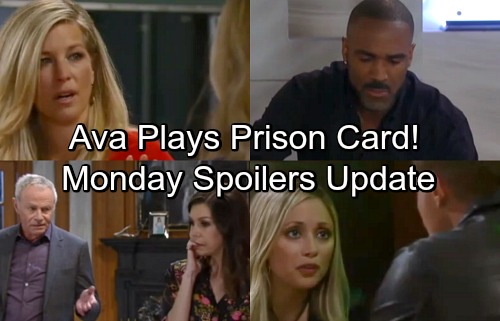 General Hospital (GH) spoilers update for Monday, April 30, tease that Ava (Maura West) will give Sonny (Maurice Benard) her demands. She’ll suggest that he can take them or leave them, but Sonny’s going to suffer either way. Ava will warn that she’s getting full custody of Avery (Ava and Grace Scarola) or else Mike (Max Gail) will end up in prison. It appears Ava will leave no room for negotiation.

Meanwhile, Nelle’s (Chloe Lanier) phony concern will set Carly off. GH spoilers say Carly will blast Nelle for thinking she could fool anybody. It seems Nelle won’t bother getting too upset. She’s got a devious plan in motion and it’s sure to make Carly even more miserable soon.

Other General Hospital spoilers say Robert (Tristan Rogers) will have evidence to back up his accusations. He believes Valentin (James Patrick Stuart) found Heinrik so he could deliver him to Faison (Anders Hove) personally. Anna (Finola Hughes) will take a look at Valentin’s file and determine that everything adds up. She’ll rant about Valentin’s strategy, but she may not be quick to go after him.

Robert won’t want Anna to just let this go and she probably doesn’t intend to. Anna simply has to think about her own tactic here. She’ll have some ideas about how to handle Valentin soon enough. Elsewhere, Valentin will have a different problem on his mind. Nina’s (Michelle Stafford) still stuck on her Peter (Wes Ramsey) suspicions and that’s making Valentin awfully nervous.

Valentin will maintain that Nina’s looking for trouble where there isn’t any. He’ll insist that Curtis (Donnell Turner) won’t find anything, but the master P.I. will prove him wrong. General Hospital spoilers say Curtis will uncover shocking info in Peter’s office, so Nina should hear about it soon.

Over with Sam (Kelly Monaco), she’ll keep Drew (Billy Miller) in the dark on Curtis’ mission and distract him with coffee. Of course, there’ll be a legitimate reason to grab that caffeine. Sam and Drew need to talk about their relationship. They’ve been taking a break, but they should really try to figure out what the future looks like.

Across town, Jason (Steve Burton) will be busy meeting with Lulu (Emme Rylan). They’ll ask each other for Heinrik updates, but they’ve still got some work to do before they learn the truth. We’ll keep you posted as other GH news comes in. Stick with the ABC soap and don’t forget to check CDL often for the latest General Hospital spoilers, updates and news.