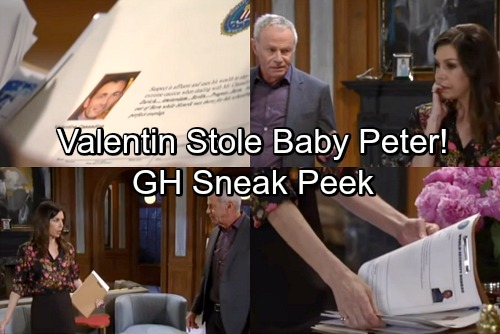 General Hospital (GH) spoilers tease that Anna (Finola Hughes) will check out Valentin’s (James Patrick Stuart) file and reach a shocking conclusion. Robert (Tristan Rogers) recently put it all together and determined that Valentin delivered Heinrik to Faison (Anders Hove). He’ll urge Anna to accept that Valentin was in deep and handled the matter personally.

Anna will struggle to believe that at first, even after the dates line up. She’ll see that Valentin would’ve been in the right place at the right time, but she won’t think it proves anything. General Hospital spoilers say Anna will call this evidence “paper thin,” but Robert will work to change her mind. He’ll insist that Valentin positioned himself in Brussels when Anna gave birth.

Anna will argue that Valentin was just around long enough to see Heinrik handed off. However, it’ll slowly dawn on Anna that she got played. Everything will begin to make sense for Heinrik’s duped mom. Anna will rant about how Valentin hated her the depths of his soul. She’ll realize she gave him this opportunity by compromising herself on this mission.

General Hospital spoilers say Anna will sit down and take all this in. She’ll note that all Valentin had to do was make his move and wait for a chance to use the child against her. Anna will admit that it was pretty brilliant on Valentin’s part. She’ll suggest Valentin has repeatedly proven that he’s a master strategist.

Of course, Anna doesn’t have all the facts. She has no idea that Valentin and Heinrik currently have a powerful partnership. Peter (Wes Ramsey) is becoming harder for Valentin to control, but they’re still GH allies at this point.

Will Anna’s suspicions start to rev up? Will she realize that Valentin is still using her son against her? That may tie in with Anna’s decision to give Valentin a pass for now. Robert won’t understand, but maybe Anna will want to use her new knowledge in a sneaky way. She might sit back and monitor who Valentin’s interacting with. Any secret meetings could lead to red flags.

If Anna notices Peter and Valentin seem to be in cahoots, that could certainly lead to trouble. Regardless, some exciting drama’s ahead for May sweeps. We’ll give you updates as other GH news comes in. Stick with the ABC soap and don’t forget to check CDL often for the latest General Hospital spoilers, updates and news.