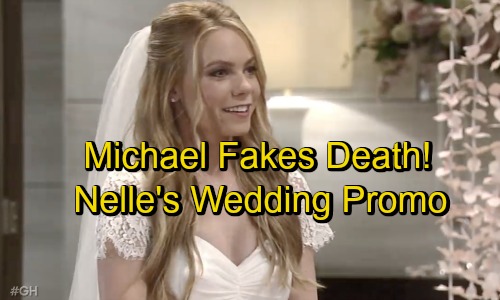 General Hospital (GH) spoilers tease that a risky scheme’s cooking. Jordan (Vinessa Antoine) definitely has some reservations about Chase’s (Josh Swickard) grand plan. However, she’s shoving her doubts aside and letting him go through with it. Jordan just wants Chase to make sure he leaves nothing to chance. Every move has to be carefully calculated in this Nelle (Chloe Lanier) takedown mission.

Chase believes he has everything under control, but does he really? There plenty of ways this plot could go horribly wrong. General Hospital spoilers state that Chase will focus on protecting Michael (Chad Duell). The plan is to fake Michael’s death, so it’s easy to see why Jordan’s concerned. She warned that Michael had better not have a scratch on him at the end of all this.

Chase will likely keep his promise and indeed leave Michael unharmed. However, Nelle may not fare quite as well! There’s been an awful lot of lethal talk lately. When Chase first suggested this idea to Jordan, she warned that it could be fatal. That could turn out to be true, but it’s not Michael she should be worried about.

There’s one crucial flaw in Chase’s scheme. Seriously…it’s a doozy of a blunder! Chase insisted that it’s important to keep everyone else out of the loop. That includes Michael’s loved ones. Naturally, Michael pointed out the cruelty this will involve. The Corinthos clan already lost Morgan (Bryan Craig), so Michael’s “death” will be truly devastating.

In fact, it could be devastating enough to prompt deadly revenge! Sonny (Maurice Benard) and Jason (Steve Burton) have already given Michael the danger speech. Nelle allegedly killed her first fiancé, so they’re worried Michael could suffer the same fate.

Once Michael pretends to bite the dust, Nelle will have a target on her back. General Hospital spoilers say Chase will offer reassurance to Nelle on July 18. A couple days later, Nelle will ask Chase for help. It’s possible Chase will play up their previous connection and suggest a murder followed by a cover-up. She could take him up on the offer and prove she’s always just been after Michael’s money.

There’s also a chance Michael will simply turn up “dead” and they’ll let Nelle panic herself into a corner. Regardless, Nelle’s enemies will be out in full force. If she gets killed for murdering Michael, Sonny and Jason would be obvious suspects. However, they might be a little TOO obvious. GH might go for a more unexpected option.

Carly’s (Laura Wright) another choice, but she may still be locked up in Ferncliff at the time. Josslyn (Eden McCoy) would be a great character to use here. She could wise up and come unhinged after her beloved brother “dies.” Then again, Zach’s sister, Sharon (Brea Bee), could make a surprise comeback as Nelle’s killer. Her vengeful desires are surely as strong as ever.

Even Chase himself could be a possibility. How far would he go to get justice? Whatever the case, Nelle’s shot at survival isn’t looking good at the moment! We’ll give you updates as other GH news comes in. Stay tuned to the ABC soap and don’t forget to check CDL often for the latest General Hospital spoilers, updates and news.