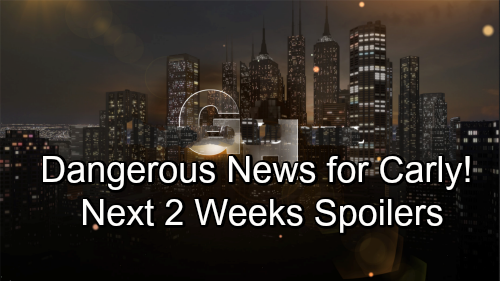 General Hospital (GH) spoilers for the next two weeks tease that things are about to heat up in Port Charles. During the week of October 15-19, several GH characters will face dilemmas. For starters, we’ll see Drew (Billy Miller) wrestle with the Margaux (Elizabeth Hendrickson) situation. He’d certainly like to get his hands on that flash drive, but he’d have to make a deal with the DA devil to do it.

While Drew makes his choice, Lulu’s (Emme Rylan) marriage will take another hit. Dante (Dominic Zamprogna) already irked Lulu on the phone and he just may do it again. She’ll wonder how they can patch things up when he’s off doing who knows what, who knows where. It’s clear that their relationship is headed downhill quickly.

Later, Maxie (Kirsten Storms) will have some encouraging words. She’ll probably urge Lulu not to give up, but we could also see some conflict for these two. Peter (Wes Ramsey) made a “date” for the film festival with Lulu, so Maxie may warn that it’s a bad idea. Getting close to another man isn’t in Lulu’s best interest right now.

Of course, Lulu will argue that this is perfectly innocent. Peter will catch a lucky break eventually, so maybe the mess with Lulu will end up pulling Maxie closer to him. A little jealousy goes a long way! Over with Valerie (Brytni Sarpy), she’ll step up for a friend. Perhaps Kristina (Lexi Ainsworth) will get a helping hand as she tries to find a new path.

Unfortunately, Kristina’s life will soon take another wrong turn. The week of October 22-26 will deliver a terrible blow. Kristina will be crushed, so she’ll get support from both Alexis (Nancy Lee Grahn) and Jason (Steve Burton). She’ll rely on her family to assist her during this nightmare.

Ava (Maura West) will go through a difficult ordeal as well. She’ll end up feeling awfully hurt, so “Kevin” aka Ryan (Jon Lindstrom) may be there to comfort her. This undoubtedly has something to do with Kiki (Hayley Erin) and Griffin’s (Matt Cohen) blooming relationship. Ryan will do his best to add fuel to Ava’s vengeful fire!

Other General Hospital spoilers say Laura (Genie Francis) will tell Carly (Laura Wright) her troubles. That could be pretty dangerous for Ryan. If the wheels turn hard enough for Carly, she could put a few clues together and question the Ferncliff drama. Carly’s knowledge of the mystery patient could come back to bite Ryan sooner or later.

Finally, Kim (Tamara Braun) will stop by to see Sam (Kelly Monaco). Drew’s (Billy Miller) exes may bond over Oscar’s (Garren Stitt) struggles as well as his father’s. Perhaps these two can find a way to help them out.

General Hospital fans won’t want to miss all the tragic twists and hot moments. We’ll give you updates as other GH news comes in. Stay tuned to the ABC soap and don’t forget to check CDL often for the latest General Hospital spoilers, updates and news.