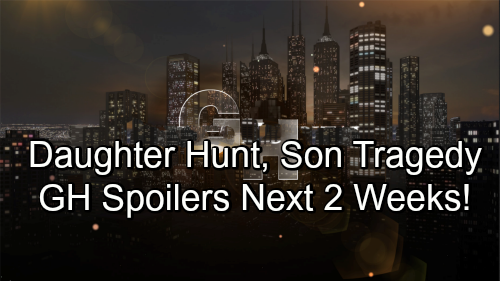 Naturally, Sonny and Carly will try to get rid of them. They’ll insist that Mike had nothing to do with that body, so they should just run along. When Margaux and Jordan don’t back down right away, it looks like Mike will exploit his own condition. He may fake a meltdown or just a bout of extreme confusion. If Mike has to suffer with Alzheimer’s, he might as well use it to his advantage, too.

Other General Hospital spoilers say Sam (Kelly Monaco) will turn Oscar (Garren Stitt) away. He’ll think she knows why Drew (Billy Miller) and Kim (Tamara Braun) are fighting, so he’ll urge her to come clean. Sam will send Oscar back in his parents’ direction, but she’ll try to warn Drew later. She’ll suggest that Oscar’s getting too curious and promise to be there for Drew when the truth comes out.

Later, Margaux will get a shock. GH spoilers say Sam will corner the DA and provide a stern warning. She may argue that manipulating Drew isn’t going to fly. He’s got a lot of people who care about him, including Sam. Margaux may brush Sam off, especially since she’s focused on a case right now. The week of September 24-28 will bring some new ideas and suspicions for Margaux.

While Margaux comes up with a theory regarding the corpse, Stella (Vernee Watson) will meet with Jordan. They’ll share a couple drinks and make an effort to get past their issues. Elsewhere, Nina (Michelle Stafford) will enjoy a day out with Charlotte (Scarlett Fernandez). It’ll undoubtedly bring out Nina’s maternal side and make her more determined to find her missing child.

Valentin (James Patrick Stuart) will certainly keep working on that. Thanks to Curtis (Donnell Turner), Valentin will have high hopes for the future. He’ll rapidly inch closer to finding Nina’s daughter and setting a reunion in motion. Over with Lulu (Emme Rylan), she’ll seek some intriguing information. This may have something to do with the Ryan Chamberlain (Jon Lindstrom) story she’s working on.

Ryan himself would gladly offer any info Lulu needs – as “Kevin” (Jon Lindstrom) of course. Across town, Brad (Parry Shen) will be put on notice. Julian will become a bit rattled about something, so he may see some ways for Brad to get tripped up. Neither one of them will want the baby swap to be exposed!

Over with Michael (Chad Duell), he’ll offer an apology to Carly. It sounds like he’ll lash out in his grief and be sorry for it later. General Hospital spoilers say some emotional moments are brewing. We’ll give you updates as other GH news comes in. Stick with the ABC soap and don’t forget to check CDL often for the latest General Hospital spoilers, updates and news.