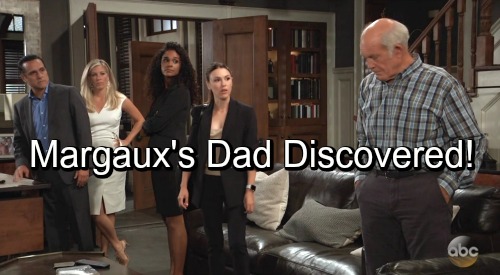 General Hospital (GH) spoilers tease that the skeletal remains discovered after the explosion at Charlie’s Pub will not only be revealed as from the body from Croton, but as of DA Margaux Dawson’s (Elizabeth Hendrickson) father. It’s obvious Margaux has an agenda, and likely a vendetta against Sonny Corinthos (Maurice Benard) to begin with.

General Hospital fans recall that in Margaux’s conversation a few weeks ago with Drew Cain (Billy Miller) she said her dad left when she was barely a toddler, and grew up in Princeton, NJ. She also said their last name was “Marino”, but there is no “Marino” ever associated in GH history with either Frank Smith (George Gaynes, Mitchell Ryan, Joe Cortese), Sonny Corinthos or Joe Scully Sr. (Robert Miano).

So GH writers are once again changing known history with an added character. Margaux also said in her conversation with Jordan Ashford (Briana Nicole Henry) that Sonny showed up in town in 1990, although long-time GH fans know he was not part of the Port Charles landscape until 1995.

A sample from the bones will likely be submitted to the national forensic registry to see if there is a DNA match that will lead to the bones being identified as Margaux’s long missing father.

Margaux must have done quite an investigation to try to find her missing father, even though according to her story, she would have barely remembered him if at all. General Hospital spoilers say there may be more to her vendetta than just taking down Sonny for her father’s murder.

GH buzz is that Margaux could prosecute Mike Corbin (Max Gail), at least as an accessory, as a way to maneuver Sonny to confess to the murder. Of course, Sonny didn’t murder her dad – Scully did, and had Sonny merely bury the body.

This kind of prosecuting Mike maneuver will show Margaux to be a heartless, success driven person who only cares about winning her prosecution cases, no matter how she does it. If she has to emotionally blackmail Sonny into a false confession, apparently either the gun won’t be found or his DNA will not be on it. General Hospital spoilers promise a dramatic path to the solution of this cold case; keep watching GH and checking General Hospital spoilers frequently to see how this plays out!