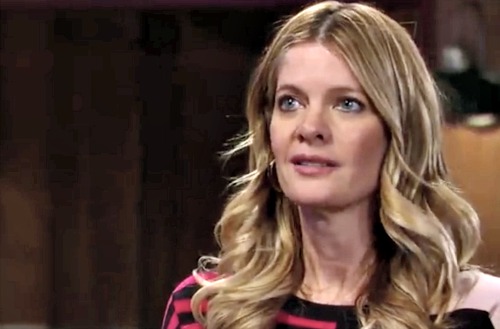 General Hospital (GH) spoilers say Nina Cassadine (Michelle Stafford) could put Drew Cain (Billy Miller) on the path to the truth. She may find the flash drive that contains Drew’s memories, which would undoubtedly make her feel better about the situation. Nina’s kicking herself for not trusting her instincts about Peter August (Wes Ramsey), so giving Drew his memories back would ease her mind.

Peter dropped the flash drive during the kidnapping, so that makes Liesl Obrecht (Kathleen Gati) an obvious suspect. Nina may begin to wonder if her partner in crime swiped it. Before she seeks answers on that, Nina will have a conversation with Drew at The Floating Rib. She’ll talk about that guilt we mentioned and mention the memory-containing flash drive.

Drew will find Nina’s knowledge a bit puzzling. He’ll ask how she knew about the flash drive, but will Nina confess the truth? It’s possible she’ll make some excuses and suggest that Drew’s memories might’ve been left behind. Nina could lie that Peter told Valentin Cassadine (James Patrick Stuart) he was leaving it for Drew. That’d tip Drew off to the fact that it ended up in someone else’s hands.

Then again, there’s always a chance that Nina will come clean. She’s been struggling to keep this scheme going, so she may get fed up and spill the truth eventually. Regardless, that flash drive must be found. One way or another, Drew needs to get his memories back.

If Liesl indeed has the flash drive, what are her plans? Why would Liesl even want it? There was a Jerry Jacks (Sebastian Roche) mention on GH recently, so that could be a hint. His name came up in a chat between Alexis Davis (Nancy Lee Grahan) and Kevin Collins (Jon Lindstrom). Perhaps Jerry and Liesl are in cahoots again! They could be working on some evil experiment, which might require this flash drive.

No one knows what kind of memories Drew might be missing. The flash drive surely contains some shocking secrets, so there are plenty of General Hospital story possibilities. As for where Liesl might be hiding the flash drive, her purse would be the perfect place. Liesl could’ve scooped it up and tucked it away for safekeeping.

If Nina starts searching, Liesl’s purse would be the perfect spot to start. General Hospital spoilers say Nina could really come through for Drew. She just has to do a little snooping and make a satisfying discovery. We’ll give you updates as other GH news comes in. Stick with the ABC soap and don’t forget to check CDL often for the latest General Hospital spoilers, updates and news.