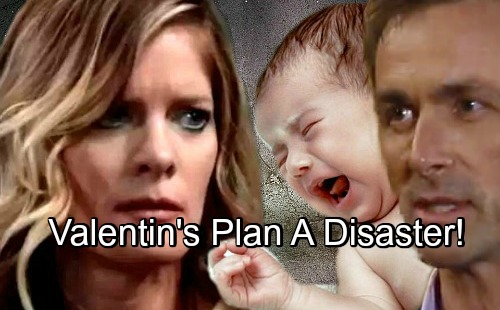 General Hospital (GH) spoilers tease that Valentin’s (James Patrick Stuart) scheme will bring major drama. Now that Nina’s (Michelle Stafford) washed her hands of him, Valentin knows he needs to do something big and bold. Nothing short of a miracle can save his marriage and that’s exactly what he intends to give Nina.

Valentin knows how much Nina wants to be a mother. Luckily, it turns out Nina’s a mom after all. Valentin just has to track down her daughter and earn Nina’s deep gratitude. It’s a fantastic plan, but it’s destined to fall apart. Everything hinges on keeping this mission under wraps, so it’s a recipe for disaster.

Valentin could spark more heartache if Nina learns what’s up and gets excited too early. What if her child is dead, can’t be found or wants nothing to do with her? There are plenty of ways this could bring additional pain.

Valentin will work hard to keep Nina out of the loop, but James Patrick Stuart assures fans that’s going to be difficult. In an interview with Soap Opera Digest, Stuart suggested this soap secret will be spilled. You can bet Valentin will land in quite a jam thanks to his efforts.

Will Nina uncover the truth sooner than Valentin would like? “Somewhere along the line, that will be an issue,” Stuart said. He added that Valentin “could really make a mess of things if it doesn’t happen the way he hopes it all will.”

If we read between the lines, that pretty much guarantees Nina will find out what Valentin’s up to. Once she gets over the shock, Nina will naturally want to pitch in on the search for her kid. That could actually work to Valentin’s advantage at first. Working on this important goal together might bring Nina and Valentin closer.

However, trouble could strike if this GH hunt hits a snag. Someone out there could even make it seem like Nina’s daughter is deceased and crush her dreams. Bogus proof would be easy to cook up if somebody wants to throw Nina off the trail.

Fortunately, the truth has to come out! On September 7, General Hospital spoilers say Curtis (Donnell Turner) will be fired up and ready to act. Could he go against Valentin’s wishes and reveal their mission? Nina will have a wild idea that same day, so it’s possible she’ll contribute to the search right off the bat. Even if the plan goes wrong, Nina may keep at it until she makes a stunning discovery.