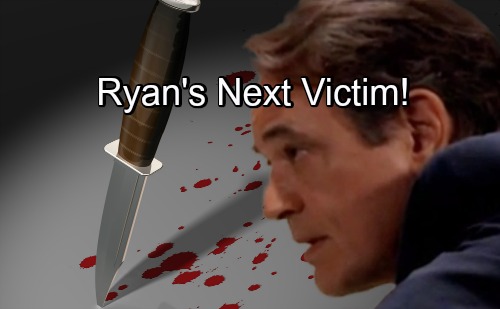 General Hospital (GH) spoilers tease that Ryan (Jon Lindstrom) is back and may have plans to start killing again. Viewers have gotten several glimpses of the mystery patient in Ferncliff, and many believe he’s Kevin (Jon Lindstrom) who is being held prisoner while Ryan has assumed Kevin’s identity. Assuming that’s true, then there’s a dangerous killer on the loose in Port Charles!

Ryan’s got a long history of terrorizing Port Charles residents. Back in the 90s, he was obsessed with Felicia (Kristina Wagner) and nearly killed her. He did kill a mental health professional, as well as his first wife, and he attempted to bomb Felicia and Mac’s (John J. York) wedding.

He “died” in 1995 when he allegedly burned to death in a Funhouse after he kidnapped Georgie (then portrayed by Ryan and Caitlin Cohen).

But now Ryan’s back, and one has to wonder whether his lust for killing will return…or maybe it already has. Who knows what Ryan’s actually been doing all these years. But one thing’s for sure – he hasn’t targeted any familiar Port Charles folks recently. But that could change.

There’s a new staff at Ferncliff, and that may mean that Kevin has a shot at being released. It looks like Kevin may be making progress with his new orderly, who seemed willing to listen when Kevin insisted that there was a killer on the loose in Port Charles. It may take a while, but soon Kevin may be successful at persuading someone that he’s being held against his will.

All this means that Ryan may have a harder time keeping a lid on Kevin, and that means Ryan will be under more stress. Stress might trigger Ryan’s violent tendencies. if that’s the case, then some Port Charles residents may be in imminent danger. But who might Ryan target? There are several possibilities.

One glaring possibility is Kevin. Ryan could decide to just get rid of his brother entirely and take over his life permanently going forward. It would be a bit tricky now that Ferncliff is operating under new (and more ethical) staff, but it could still happen.

Another person in danger might be Carly (Laura Wright). Carly knows that there was patient in distress at Ferncliff, and she’s mentioned it to “Kevin” a couple of times since her release. Ryan will likely be keeping a close eye on Carly from now on to make sure she doesn’t get too preoccupied with the mystery patient and go asking questions.

Lucy (Sheryl Herring) could also be in danger from Ryan. Lucy has noticed that “Kevin” has been acting preoccupied and not himself lately. If she persists in bugging Ryan and noticing too many oddities in his behavior, he may decide to put a lid on her…permanently.

Of course, Felicia could be at risk, too. Ryan has a history of targeting her, and he could decide to come after her again. GH spoilers say that Lulu (Emme Rylan) will soon warn Felicia that The Intruder is planning a story on the anniversary of Ryan’s crime spree. The anniversary of Ryan’s spree could trigger something in Ryan that may make him want to relive his old glory,

The Orderly Caring For Kevin

And finally, the orderly who is watching over Kevin in Ferncliff could be in danger, especially if he starts to believe Kevin and starts asking questions. He could easily be drugged or killed by Ryan in order to protect Ryan’s secret.

That’s quite a list! Do you think that the residents of Port Charles are in imminent danger? Who do you think Ryan will go after? Stay tuned to the ABC soap and don’t forget to check CDL often for the latest General Hospital spoilers, updates, and news.