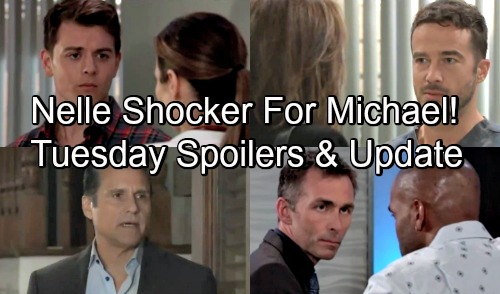 General Hospital (GH) spoilers for Tuesday, August 28, tease that we’ll get back to Ferncliff for another round of twin chaos. GH fans know Ryan’s (Jon Lindstrom) alive, but the show hasn’t revealed which brother is being held against his will. However, it makes sense that Ryan has taken Kevin’s (Jon Lindstrom) place.

Since Ryan’s evil and believed to be dead, no one would really care if he were locked up. Kevin, on the other hand, has plenty of friends and family members who care about him. If Ryan’s impersonating Kevin as we suspect, it opens the door to a lot more drama.

Regardless, the truth will be exposed to viewers on Tuesday’s new GH episode, August 28. When one twin pops in for a visit, their conversation should explain who’s the real Kevin. Of course, it’ll be a while before the rest of Port Charles figures it out!

In the meantime, Valentin (James Patrick Stuart) will focus on his own secret. Now that he knows Nina’s (Michelle Stafford) child survived, he’s turned to Curtis (Donnell Turner) for assistance. General Hospital spoilers say Curtis will want to bring Nina in on this, but Valentin will nix the idea. He won’t want to get Nina’s hopes up in case the search doesn’t pan out.

Elsewhere, Nina will meet with Diane (Carolyn Hennesy). She’ll suggest that she has a big problem with something, but there may not be much she can do about it. This could be related to Madeline’s (Donna Mills) parole or another case that Nina intends to get wrapped up in. Maybe this will keep Nina distracted while Valentin and Curtis dig for answers.

At GH, Lucas (Ryan Carnes) will worry about the custody hearing. He’ll tell Alexis (Nancy Lee Grahn) that in a matter of hours, they’ll know if they get to keep their son. Alexis will warn that things probably won’t go Lucas and Brad’s (Parry Shen) way, but Julian (William DeVry) will try to be more positive. He’ll tell Brad that he contacted the birth mom, so changes are hopefully brewing.

Other General Hospital spoilers say Kim (Tamara Braun) will have Nelle (Chloe Lanier) news for Michael (Chad Duell). She’ll pass along some surprising updates, so perhaps Nelle’s got some post-birth medical issues or even faced an attack behind bars. Michael may not care much, but he’ll appreciate Kim taking the time to fill him in.

Over with Sonny (Maurice Benard), he’ll make a big announcement. He’ll inform Jason (Steve Burton) and Carly (Laura Wright) that he’s made a decision about his dad. Mike (Max Gail) had a scary incident in the Corinthos home, so Sonny’s starting to see that he can’t give his father the help he needs. He may choose to move forward with the memory care facility plans.

Unfortunately, General Hospital fans should see another terrifying ordeal before Mike goes. When Oscar (Garren Stitt) stops by to see Sonny, the situation will take a frightening turn. It looks like Oscar may be shot, so it’s possible Mike will gain control of a gun and pull the trigger. Oscar will definitely land in danger somehow, so Jason will quickly leap into action.

GH has some action-packed scenes in store. We’ll keep you posted as other details emerge. Stay tuned to the ABC soap and don’t forget to check CDL often for the latest General Hospital spoilers, updates and news.