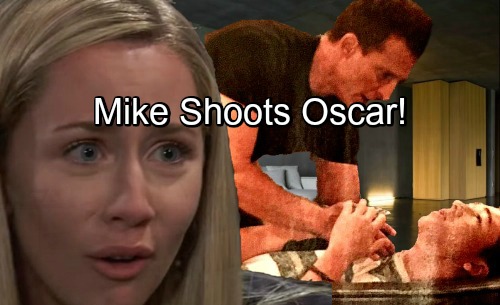 General Hospital (GH) spoilers claim Sonny (Maurice Benard) has been procrastinating when it comes to Mike (Max Gail). Will the decision be taken away from Sonny when Mike hurts someone? General Hospital spoilers indicate this could be what happens in upcoming new GH episodes.

Sonny And Mike Make Up For Lost Time

Sonny and Mike have been connecting lately. Mike was never there for Sonny as a child, but he is now. Sonny doesn’t want to give this up. Yankee’s games and playing catch with his dad were things Sonny always wanted to do. However, Mike walked out on Sonny and his mom.

Sonny and his mom suffered much because of that. Sonny feels like he’s gotten a second chance with his dad. Sonny doesn’t want to give up the connection he and Mike have made. It is evident to everyone else that Mike is losing ground quickly.

Sonny doesn’t want Mike to feel like he isn’t wanted. Whether he realizes it or not, Mike uses this every time Sonny brings up the subject. Soon, it seems it will be evident that Sonny has waited too long.

GH spoilers tease that in the coming days Oscar (Garin Stitt) will go to see Sonny. Since Oscar is dating Jocelyn (Eden McCoy), it is probably related to her. If Mike’s recent actions are any indication, Mike’s Alzheimer’s is causing him to have episodes of extreme paranoia. Sometimes, Mike is just delusional.

We saw this recently when Mike saw a guard outside and set off the alarm. Mike has everyone in full panic mode and will be lucky not to get hurt himself. What happens when Mike goes into this mode again?

Perhaps Mike sees Oscar as the enemy since he doesn’t recognize him. Sonny has guns in the house in various places. The guards would let Oscar in without question. General Hospital buss says it looks like Mike will think he’s protecting the family and Oscar gets shot.

Oscar’s shooting will make Mike a danger to others – GH spoilers say this could force him into a facility. Sonny, no matter how powerful, isn’t going to be able to stop this.

Jason To The Rescue

General Hospital spoilers indicate that luckily, Jason (Steve Burton) seems to be around when Oscar is hurt. It appears that Jason will use his extensive gunshot wound knowledge to save Oscar.

Drew (Billy Miller) and Kim (Tamara Braun) will insist on Oscar visiting the hospital which will result in an incident report. It remains to be seen whether Drew will be grateful to Jason for saving Oscar’s life with his quick action.