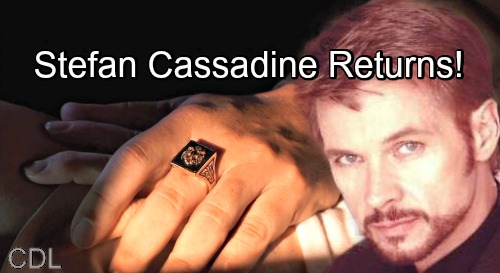 The search team, currently consisting of Anna Devane (Finola Hughes), Hamilton Finn (Michael Easton), Robert Scorpio (Tristan Rogers) and Harrison Chase (Josh Swickard) will attempt to track Valentin’s movements to find Cassandra, but fail to find her with him. However, the continued search for Cassandra could lead to yet another Cassadine…Stefan (Stephen Nichols) and CDL exclusively reported.

Longtime GH viewers will remember Stefan as the Cassadine brother who was protective of Alexis (Nancy Lee Grahan) and his nephew Nikolas (most recently Nick Stabile) – sometimes, although as a true Cassadine, he had a love-hate relationship with most everyone among his family and friends. He had also been a lover of Laura Spencer Collins (Genie Francis) and until a DNA test was done, was suspected to be Nikolas’ father.

At the end of his time on GH, about fifteen years ago, his presumed death happened when he was burned and disfigured, as well as stabbed, during a fight with Luke Spencer (Anthony Geary). He was not in his right mind by that time, and had previously faked his death and left a suicide note which exonerated Luke of his murder as a result of the fight.

Could the team’s search lead them instead to Stefan who might have been one of Patients 1-5? He may be healed now and this may tie into one of the storylines involving the return of Laura to Port Charles, given her and Stefan’s GH history.

Does Valentin know he has a living brother or possibly an uncle? It is highly unlikely since he turned up as the heir to the Cassadine money, and moved into Wyndemere. He even fought little Spencer Cassadine (Nicholas Bechtel) over the inheritance.

However, Valentin has implied many times that Nikolas may not be dead! But Nikolas wanted to disappear…he tried to fake his death before also, as had his uncle Stefan before him. Valentin very well could have helped Nikolas fake his death by shooting a blank into him, and have some associates catch him when he fell and then helped him disappear.

Since it appears that Stefan’s return, at least in the form of hand, may have already occurred (on the GH episode, August 24) fans should also expect the possibility of seeing Nik in Port Charles during a future sweeps period. Two Cassadines are better than one!

Since Stephan Nichol’s run at Day of Our Lives is rapidly winding down (his final airdate on Days is August 31) it would make sense to subtly announce his return by showing his hand on that of Cassandra’s, as appeared to be the case on Friday’s GH episode, August 24. This reminds savvy soap fans of the return of Adam Newman on Y&R!