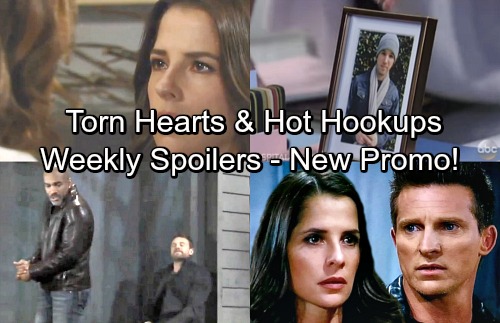 General Hospital (GH) spoilers for the week of March 26-30 tease that some exciting episodes are on the way. First, Drew (Billy Miller) will battle heartbreak while Sam (Kelly Monaco) tries to figure out what’s next. Once Alexis (Nancy Lee Grahn) is in the loop on Sam’s marriage troubles, she’ll offer some helpful advice.

Based on Alexis’ thoughts in the past, she’ll probably tell Sam to think long and hard before she throws away her relationship with Drew. If Sam chooses Jason, Alexis will want her to be absolutely sure that’s what she wants. Of course, Drew has taken himself out of the picture at the moment. He’ll open up to Curtis (Donnell Turner) about the pain he’s dealing with this week.

As a result, Curtis will decide to speak up for his pal. General Hospital spoilers say he’ll pay Sam a visit and offer his two cents on the situation. For what it’s worth, Curtis will think Drew is a good man who deserves Sam’s love. He’ll hope Sam and Drew can get things back on track eventually.

Nevertheless, Sam will have a warm moment with Jason a little later. Will they start inching toward an official GH reunion? It certainly looks like they’ll be headed in that direction soon. Meanwhile, Kim (Tamara Braun) and Julian (William deVry) will take their romance to the next level. They’ll enjoy a steamy love session, but they’ll agree that this doesn’t have to be a huge deal.

Julian and Kim will continue to take their time as they see where this might lead. For now, they’ll just keep getting to know each other and hope for the best. Elsewhere, Peter (Wes Ramsey) will struggle with some guilt. He’s hiding major secrets from all of Port Charles, but he’ll probably be most concerned about hiding them from Maxie (Kirsten Storms).

Other General Hospital spoilers say Jason and Liz (Rebecca Herbst) will put their conflict to rest. They haven’t been on the same page about Franco (Roger Howarth) and they probably never will be. However, they’ve got a kid to raise and life is too short to deal with so much drama. Liz and Jason will reach an understanding, so that sounds like great news for their co-parenting arrangement.

Over with Sonny (Maurice Benard), he’ll work on securing Andre’s (Anthony Montgomery) assistance. He’ll do whatever he can to help Mike (Max Gail) keep his memories intact. That could mean undergoing a risky memory mapping procedure if Andre agrees to do it.

Don’t forget that GH is celebrating its 55th anniversary this week! Look for a special episode on Friday, March 30. We’ll give you updates as other details emerge. Stay tuned to the ABC soap and check CDL often for the latest General Hospital spoilers, updates and news.