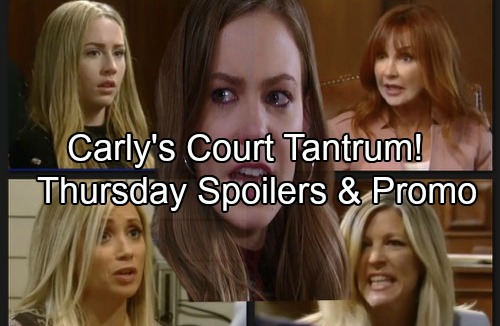 General Hospital (GH) spoilers for Thursday, June 7, tease that Lulu (Emme Rylan) will certainly have her doubts about Nelle’s (Chloe Lanier) claims. Dante (Dominic Zamprogna) will be all dressed up, so it looks like he’ll be heading off to court. Before he goes, he’ll talk to Lulu about the predicament Carly’s stuck in.

Lulu will suggest that she doesn’t believe a word out of Nelle’s mouth. She can tell that this is all a scheme to target Carly. Later, DA Margaux Dawson (Elizabeth Hendrickson) will get Bobbie (Jacklyn Zeman) riled on the stand. Bobbie will shout that Nelle’s a parasite. She’ll insist that their family has suffered from the moment Nelle showed up in town.

Unfortunately, Josslyn (Eden McCoy) will also have to testify. She’ll look nervous once she’s called to the stand. Josslyn has been siding with Nelle, so her comments about her mom probably won’t be too kind. It should be brutal for Carly to listen to her daughter’s criticism, especially when it’s all based on Nelle’s lies.

General Hospital spoilers say Nelle will testify as well. The whole ordeal will leave Carly on edge, so that could work in her favor. After Carly lashes out at Nelle in the courtroom, the judge may believe she’s unhinged. Regardless, Carly will be sent to a mental institution soon enough. She expected to land at Shadybrook, but word has it a stint at Ferncliff is in her future instead.

Other General Hospital spoilers say Franco (Roger Howarth) and Liz (Rebecca Herbst) will discuss their wedding plans. They’ve got a big day coming up and Franco wants it to be special. He’ll talk about how he’ll promise to love and protect Liz forever. That’s part of why Franco wants to track down the rest of Liz’s family. He wants everyone to hear their vows and celebrate this important occasion.

Liz will continue to have reservations, but Franco will stick to his goal. He could be stirring up some trouble in the process! Elsewhere, Kiki (Haley Erin) will need a favor and it looks like she might turn to Ava (Maura West). Kiki may explain the latest Dr. Bensch (James DePaiva) drama and seek Ava’s assistance somehow. She’s hoping to track down other victims, so she needs all the help she can get.

Ava will also have a chat with Griffin (Matt Cohen) on Thursday’s GH episode. She’ll open up about her regrets, but he’ll insist she’s not the only one who made mistakes that night. Of course, Griffin’s talking about the evening of the Nurses Ball. He’ll drop some hints, but he’ll undoubtedly stop short of confessing. Griffin will feel guilty, but he just can’t break the news that he hooked up with Kiki.

The truth will likely come out in a much soapier way eventually. We’ll give you updates as other GH details emerge. Stick with the ABC soap and don’t forget to check CDL often for the latest General Hospital spoilers, updates and news.