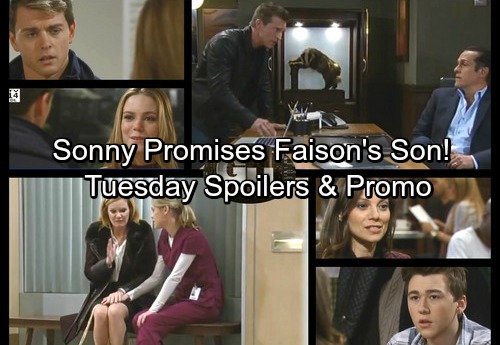 General Hospital (GH) spoilers for Tuesday, January 16, tease that Ava (Maura West) will be hopeful about her upcoming procedure. Kiki (Haley Erin) will be a bit nervous, but Ava will insist this is going to be great. She’ll suggest that once this horrific chapter is behind her, the rest will fall into place.

GH fans can expect a special Ava-centric new GH episode on Wednesday, January 17. General Hospital spoilers say it’ll be packed full of flashbacks and shockers, so stay tuned. In the meantime, Michael (Chad Duell) will have a question for Nelle (Chloe Lanier). Maybe this is about that paternity test she promised. Nelle will ask what Michael’s doing next Monday, so that might be the date they settle on.

Unfortunately, Michael and Nelle will clash during this chat. He’ll disagree with a decision she makes, but he’ll ultimately find a way to respect it. This may tie back in with Nelle’s job at the gallery or it could involve a new issue to fight about. Regardless, these parents-to-be will settle their dispute.

Other General Hospital spoilers say Kim (Tamara Braun) will have a serious discussion with Oscar (Garren Stitt). She’ll note that they need to talk about sex. Kim thinks Oscar and Josslyn (Eden McCoy) are too young to be hitting the sheets, but she’s not in panic mode like Carly (Laura Wright). She’ll just want to make sure Oscar understands what he’s getting himself into.

Of course, Kim will try to talk Oscar out of the idea if she can. Drew (Billy Miller) will likely get in on this as well. He should face some awkward moments as he tries to guide his son. Across town, Carly may take a different approach with Josslyn. She’s probably prepared to forbid this sex session if need be. Carly has quite a temper and it’s hard to tame it sometimes!

Elsewhere, Jason (Steve Burton) will deal with some frustration. He’ll wonder if they’re ever going to figure out who Faison’s (Anders Hove) other son is. Sonny (Maurice Benard) will have total confidence in their abilities. He’ll reassure Jason and contend that they’ll get some answers soon. Sonny will smile and promise that they’re going to deliver Faison’s son to him.

Since all the signs point to Peter August (Wes Ramsey), he’s clearly headed for trouble. This dangerous storyline will come with plenty of twists and turns. We’ll give you updates as other GH news comes in. Stay tuned to the ABC soap and don’t forget to check CDL often for the latest General Hospital spoilers, updates and news.