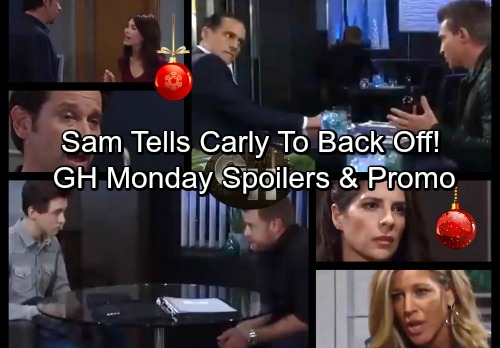 General Hospital (GH) spoilers for Monday, December 18, tease that Jason (Steve Burton) will fill Sonny (Maurice Benard) in on what he’s learned. Andre (Anthony Montgomery) admitted that Drew’s (Billy Miller) baseline memory is contained in the mini disco ball ornament. He gave it to the only person in Port Charles that he could trust, which happens to be Anna (Finola Hughes).

Jason will relay the information he was given and hope that Drew has a chance to get his memories back. Even if the procedure fails, Jason will feel like Drew remembers a lot more than he knows. With any luck, they might be able to bring those memories to the surface and discover the truth about the traitor.

Meanwhile, it looks like Sam (Kelly Monaco) will agree to marry Drew and continue their life together. Unfortunately, Carly (Laura Wright) won’t approve of that decision. She feels sorry for Drew and understands how tough this is, but she’ll still feel like Sam needs to be honest with herself.

Carly will shout that Sam loves Jason, which is undoubtedly true. However, Sam also loves Drew and he’s the man she plans to stick with. General Hospital spoilers say Sam will rip into Carly for butting in. She’ll probably insist that this is none of Carly’s business and urge her to get lost.

Across town, Drew will have another chat with Oscar (Garren Stitt). Their first encounter as father and son didn’t turn out very well, but maybe the next one will be a bit warmer. Anything will be an improvement! It’s important for Oscar and Drew to make an effort to bond.

At GH, Franco (Roger Howarth) will confess that he deceived Liz (Rebecca Herbst) and everyone involved in the twin saga. He’ll provide updates on how much he knew and when. A livid Liz will realize Franco could’ve proved which Jason was the real one. She’ll demand answers about why he stayed silent and Franco will do his best to earn her forgiveness.

Elsewhere, Jordan (Vinessa Antoine) will bump into Anna (Finola Hughes) and notice that she seems deep in thought. When Jordan asks if she’s OK, Anna will reply that she’s not sure. Jordan and Anna may find they have a few things in common. General Hospital spoilers say they’ll connect over love and loss.

Finally, Lulu (Emme Rylan) will ask Maxie (Kirsten Storms) for a favor. She’ll hate to pile on tasks around the holidays, but she’ll believe this one is crucial. It sounds like Lulu may need some help with her latest story for Peter (Wes Ramsey). We’ll keep you posted as other news comes in. Stick with ABC’s GH and don’t forget to check CDL often for the latest General Hospital spoilers, updates and news.