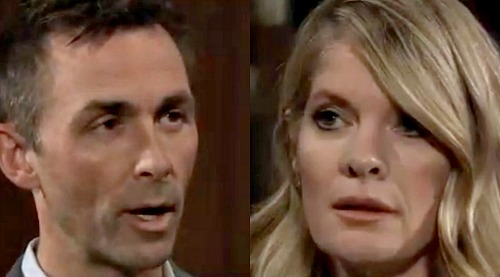 General Hospital (GH) spoilers tease that Nina (Michelle Stafford) will face some disappointment. She’ll get some discouraging news on December 11, so there are a few ways GH could go with that. It’s possible Sasha (Sofia Mattsson) will brush off their plans or something along those lines.

Then again, this could have something to do with Charlotte (Scarlett Fernandez) and being shoved out of the bullying discussion. Nina certainly wasn’t helpful during the last parent-teacher conference with Willow (Katelyn MacMullen), so she may be left out of the next one. It’d undoubtedly be for the best!

Of course, Nina’s disappointment could even stem from no real progress on Kiki’s (Hayley Erin) murder case. She believes Kiki was Sasha’s sister, so she’ll naturally care about the situation. Plus, a young life was cut short tragically. Nina and almost everyone else in Port Charles will be eager to see the true killer apprehended.

No matter what brings Nina down, she’ll wish she could lean on Valentin (James Patrick Stuart). They’ve been bonding lately, which Nina must think is a terrible idea. She was hesitant to enjoy the family evening Charlotte tricked them into. Nevertheless, Nina ended up having a good time. She’s finding Valentin harder and harder to resist, so a reunion may be looming.

On December 12, General Hospital spoilers say Nina will get a nudge in Valentin’s direction. Someone will notice her pining and suggest that Valentin deserves another chance. Charlotte would like to see Nina and her papa back together, so she’s an option for this mysterious advice-giver. Even Maxie (Kirsten Storms) or Lulu (Emme Rylan) could accept that Nina won’t be happy without Valentin in her life.

However, Sasha makes the most sense considering she’s in on Valentin’s fake daughter scheme. He might throw in some extra money to make this part of Sasha’s duties. Even if he doesn’t, Sasha genuinely seems to be rooting for the duo. Sasha’s obviously got a sneaky side, but she appears to have a softer side, too. She’s starting to care about Nina despite the fact that they aren’t mother and child.

Sasha could give Nina the push she needs and finally set this reunion in motion. Unfortunately, it’s all destined to blow up. Valentin has manipulated Nina regarding the one thing she wanted most in this world. He was trying to please her, but Nina may not see it that way when the startling truth comes out!